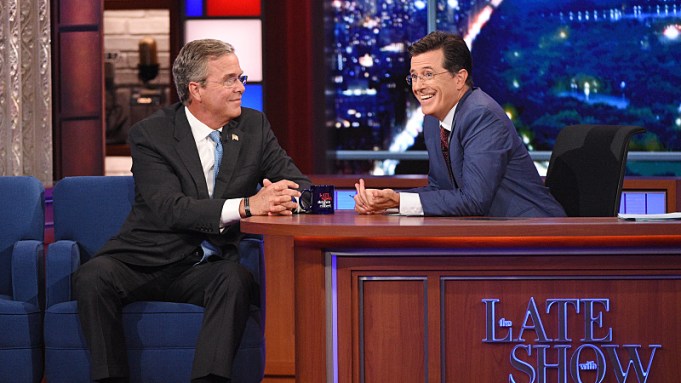 Appearing on the debut episode of “The Late Show with Stephen Colbert,” Jeb Bush took one rule perhaps too much to heart when it comes to interacting with comedians: When in doubt, play it straight.

His interview on Colbert’s new show wasn’t too awkward, nor was it particularly memorable, the latter of which is the reason candidates go on late night shows in the first place.

When Colbert asked him about the exclamation point at the end of his campaign’s Jeb! logo, Bush seemed to take the question a bit too seriously. He defended it, telling Colbert the shorthand had been around since 1994 and that the extra punctuation “connotes excitement.” Hopefully, he was deadpanning.

Part of the problem was that the segment was pretty short — just 7 minutes. And the other is that the host himself seemed to be finding his way in playing himself, not the character from “The Colbert Report.”

“I used to play a narcissistic, conservative pundit. Now, I’m just a narcissist,” he quipped.

Colbert started the interview by asking the candidate why he was running, the kind of softball question that allowed Bush to go into campaign themes of fixing Washington (a “basket case,” Bush said) and out-of-control federal spending. Bush even got a chance to repeat his line that he was known in Florida as “Veto Corleone,” for the number of spending bills he killed.

Colbert’s most provocative question had to do with how he would differ from his brother, an opening for all sorts of anecdotes. But again, Bush stuck to his own themes, saying that Dubya perhaps let the GOP controlled Congress get too out of control on spending.

Bush’s supporters played up the appearance as a way to break through a media filter obsessed with Donald Trump. Right to Rise, the SuperPAC that raised a staggering $114 in the first half of the year to support his candidacy, tweeted out a “learn more about Jeb” infographic tied to the Colbert guest spot.

Colbert’s most memorable political segment instead was a mashup of Trump, an attempt to skewer the media’s ratings-obsessed fixation with The Donald by focusing on the front runner’s moments of jibberish. “I will cover all the presidential candidates who are Donald Trump,” he said.

Given the expected size of the audience, the Bush campaign may have gotten what it needed out of the segment, a chance to get its message out there, even if the candidate didn’t stray from his stump speech persona.

Instead, it was Colbert who ended up revealing more of who he really is. At one point he said to the former Florida governor, “There is a non zero chance I would vote for you.”

Update: CBS released footage that was cut from the Bush interview, where the candidate gamely participates in a debate prep where he gives Trumpian answers. It’s akin to the stunt that he did on “The Tonight Show Starring Jimmy Fallon” in June, when Bush slow-jammed the news in a suggestive way.