Salma Hayek Blasts Hollywood Sexism at Variety Event: ‘We’re Not Going Away at 30’ 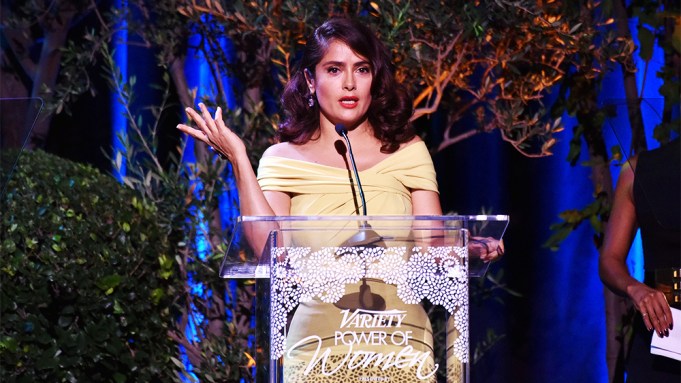 Salma Hayek Pinault blasted the ever-growing Hollywood gender gap in a stirring speech at Variety‘s Power of Women luncheon presented by Lifetime on Friday at the Beverly Wilshire Four Seasons.

“We are the generation that said, ‘We’re not going away at 30,'” she said to uproarious applause. “They cannot ignore us anymore.”

Hayek Pinault recalled fearing the move from Mexico to Hollywood only to be pleasantly surprised by the women she found surrounded with in the industry.

“This is really, really sad and tragic,” she said. “In the 20 years I have been an activist for women, I can smell the airs of change, especially in this industry for the first time.”

Hayek Pinault also slammed the films being churned by Hollywood.

“These romantic comedies are not working anymore. Why? We changed!,” she said as the crowd clapped furiously. “I think that this is the true part of equality.”

Hayek Pinault co-founded Chime for Change with Beyonce and fashion house Gucci in 2013.

“In only two years … we have affected 3 million families and communities,” she said.

The campaign supports nongovernmental agencies with the mission of empowering women and girls around the world through initiatives focused on education, health and justice. Chime for Change has so far raised $7.3 million with 153 nonprofit partners to fund projects in 88 countries, benefiting 400,000 women and girls.

She said Chime for Change is launching a new initiative called Chime for the Children of Syria.

“We are a fantastic generation,” she added. “I could not have made it without the women who gave me the strength today. For all of you who don’t know what time for change is, it is a call for everyone to use social media for social justice.”