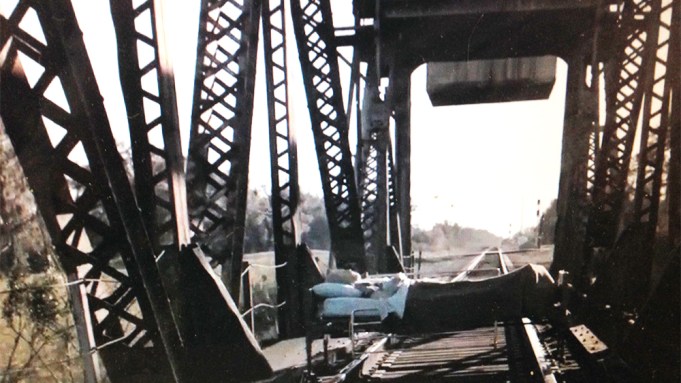 Newly released footage captured by a camera on the set of “Midnight Rider” captures a crew on a train trestle scrambling as they hear the sounds of an approaching train.

Also released was footage of the actual scene from the movie, a biopic of rocker Gregg Allman. In the scene, Allman — played by William Hurt — dreams he is in a hospital bed on a train trestle and sees a younger version of himself nearby, with a guitar.

The video footage of the crew, which a source said was captured from the A-camera that the director of photography/camera operator was holding, was played in court on Tuesday at a hearing in which Hillary Schwartz, the first assistant director on the movie, was found guilty of criminal trespass and involuntary manslaughter. In an agreement worked out between her lawyers and prosecutors, and approved by Judge Anthony Harrison, she was sentenced to 10 years’ probation.

Seen in the video is actor Wyatt Russell, holding a guitar and racing to get off the trestle. Russell played a younger version of Allman in the project.

The footage from the movie — apparently edited after the accident but before the movie suspended production — was not played in court, but prosecutors entered it into the public record. The filmed footage shows Hurt in the hospital bed, set up across the tracks on the trestle over the Altamaha River.