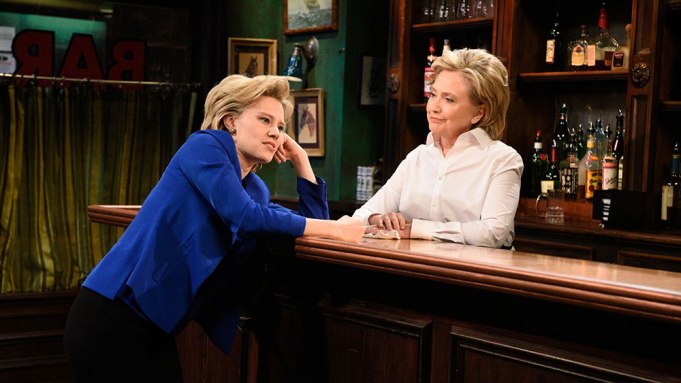 Hillary Clinton’s response to criticism that she’s too cautious, too calculating, maybe even too cold? Have fun with it on “Saturday Night Live.”

The real Hillary Clinton appeared in a sketch as “Val,” a bartender trying to console Kate McKinnon’s  Hillary Clinton, with riffs on how long it took her to come out in opposition to the Keystone pipeline. The real Clinton and the “SNL” Clinton then have an exchange over whether she took too long to come out in favor of same-sex marriage.

As Val, Clinton did an impression of Donald Trump, saying, “Isn’t he the one that’s like, ‘Uh, you’re all losers.”

She then asked, “Do you think he will win the primaries?”

McKinnon’s Clinton replied, “He must. I want to be the one to take him down. I will destroy him and I will mount his hair in the Oval Office.”

Then Darrell Hammond, as Bill Clinton, enters the bar, looked at the two women, and said, “Oh my God! They’re multiplying.”

Later the “SNL” Hillary says to “Val,””I wish you could be president.” The real Clinton replies, “Me too!”

Clinton’s appearance on the season premiere of “SNL” is the latest in a series of guest spots she’s done in non-political media, in this case skewering her image in the media, and on the media’s obsession with whether she’ll be able to be more spontaneous and personable.

Clinton’s campaign tweeted out a photo from the sketch, and the message, “A vote for Hillary is a vote for four more years of Kate McKinnon’s impression.”

The show opened with a sketch about Donald Trump, with Taran Killam playing the mogul in all his bluster.

The real Donald Trump retweeted a comment that Killam “plays a way better fake @realdonaldtrump than a @hillaryclinton plays herself.”