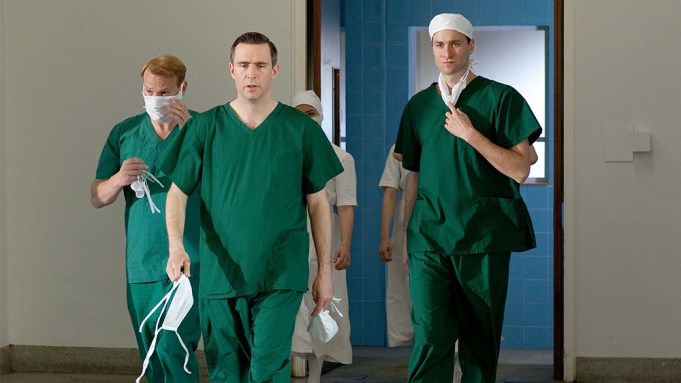 Doctors and nurses have been engaged in soapy doings since broadcasting’s infancy, but seldom in a package quite as tantalizing as “Breathless.” Set in the early ‘60s, this three-part “Masterpiece” production obviously shares certain qualities with “Mad Men,” but quickly establishes its own spin on the era replete with a web of interlocking relationships. Built around a dashing gynecologist who performs illegal abortions, the project feels timely and provocative, but can just as easily be savored strictly for its “Peyton Place”-like attributes. For those needing a fix of sumptuous British period drama until “Downton Abbey” docks, “Breathless” is a breath of fresh air.

The producers won half the battle by casting Jack Davenport (closer to “Swingtown,” happily, than his “Smash” ordeal) as Dr. Otto Powell, who appears to saunter through life with nary a care despite breaking the law to assist women with terminating unwanted pregnancies. Assured and self-confident, he’s accompanied on these surreptitious missions by a nervous anesthesiologist (Shaun Dingwall) and a beautiful nurse, Jean (Zoe Boyle), who, as luck would have it, is pregnant herself, prodding the aristocratic doctor (Oliver Chris) who’s responsible to marry her.

For Jean, though, the seemingly golden ticket from nurse to doctor’s wife turns out to be gilded in tin. At the same time, she passes the on-the-side work to her newly arrived sister, Angela (Catherine Steadman), to whom Powell is instantly, almost palpably drawn. Powell’s wife (Natasha Little), meanwhile, is paid a visit by a fidgety police inspector (“Game of Thrones’” Iain Glen) with blackmail, among other things, on his mind.

Paul Unwin, who wrote all three parts (collaborating on two of them) and directed the premiere, has stitched an awful lot into these three 90-minute chapters: Class distinctions, infidelity, a central mystery regarding the Powells’ past and the dangers associated with abortion being forced underground. Reminded his work is illegal, Powell says the law “makes miserable lives and miserable women.”

Like “Mad Men,” there’s little nostalgia here for the good ol’ days, even if Anne Dudley’s bluesy, evocative score and settings like a jazz club where they play the “Peter Gunn” theme sort of makes one long to visit. Because it’s also a time when a doctor whose wife is unhappy because he’s betrayed her can cajole a colleague to medicate her so she’ll be more docile. (A woman who begins experimenting with the birth control pill notes the freedom will let her “be like a bloke, I suppose.”)

Throw in a splendid cast – including Sarah Parish, who shows up near the end of the first night – and “Breathless” is a pretty near flawless condensation of soap-opera conventions into a delicious little package. The only conspicuous misstep, in fact, is its rather nondescript title. Because when a story is crafted as meticulously as this one, the temptation is to breathe in every last bit of it.