Two opposing views on Starz's ambitious literary adaptation, along with the video discussion above 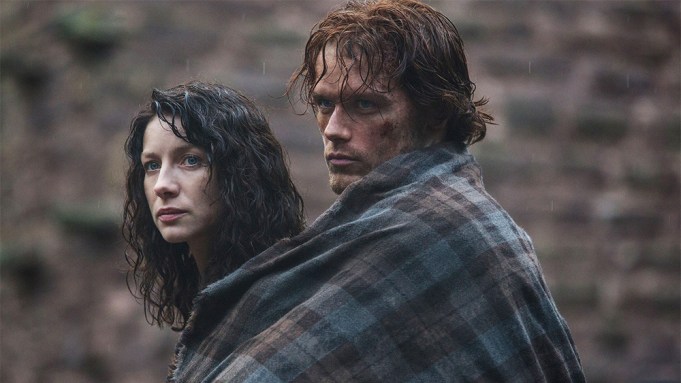 For those who turned “Outlander” into an international bestseller, seeing the characters brought to life, with Scotland as the bonny backdrop, will doubtless be something of a kick. For everyone else, the resulting series is a bit of a snooze — handsome, yes, but about as dramatically compelling as the cover of a Harlequin Romance, and too flaccid to make hearts go pitter-pat. More practically, Starz courts a different demographic with this show, which with a few trims could easily have wound up on Lifetime. And based on its not-ready-for-premium attributes, that’s probably the time and place where “Outlander” most belongs.

“People disappear all the time,” says Claire (Caitriona Balfe), a British army nurse introduced at the end of World War II delivering a novel-esque voiceover that runs throughout. Weary of bloodshed, she seeks to reconnect with her husband, Frank (Tobias Menzies), as the two embark on a scholarly trip through Scotland, periodically interrupted by gauzily shot sex.

Developed by “Battlestar Galactica’s” Ronald D. Moore from Diana Gabaldon’s book, the premiere certainly takes its time before getting to the main event — namely, Claire being inexplicably whisked back in time, where she finds herself under the protection of the brutish MacKenzie clan. (It’s not till the second episode that we learn the date is 1743.)

Claire’s keepers include the imperious war chief Dougal (Graham McTavish), who’s only one of the bearded ruffians who (in a later episode) think about raping her; and Jamie (Sam Heughan), a clean-cut Adonis who endeavors to protect Claire’s honor when he isn’t exchanging meaningful glances with her. Menzies also lingers in a dual role as Frank’s ancestor, a sadistic British officer.

There’s something to be said for a show taking its time, especially when freed of the opening-night rating pressures associated with broadcast.

Still, “Outlander” meanders along so slowly that it needs to immerse viewers in its atmosphere and rhythms — something that might appeal to ardent fans of the book, but which seems destined to try the patience of those less invested in the story.

Claire is certainly a plucky and resourceful heroine — and Balfe looks smashing in the vintage garb — but the show doesn’t have much fun with her anachronistic knowledge, which includes medical skill that makes her a formidable healer, and her sobering realization that the Scots face a grim fate at the hands of the British army.

The principals are perfectly fine, but there’s only so much unconsummated smoldering one can take. And while the period touches have been assembled with care (and filmed in Scotland), long speeches in un-translated Gaelic have a way of yielding diminishing returns.

Starz and the producers are doubtless banking on the title’s established name and built-in following to justify their faith, along with the demonstrated appeal of costume dramas (everyone wants their own “Game of Thrones”) and century-spanning romance. There’s also the show’s international allure and the way the subject matter evokes past projects about Scottish resistance.

Strictly in creative terms, though, faced with the prospect of sitting through the whole run after sampling the first half-dozen episodes, well, that’s going to require a braver heart, or at least one more forgiving, than mine.

There are no guarantees in television, but for networks and studios looking to make noise in an increasingly crowded landscape, literary adaptations with in-built fanbases are currently the safest bet in town. (Even if they’re terrible, like CBS’ overwrought “Under the Dome.”)

Thankfully, Starz’s “Outlander” is far from terrible — it’s a measured, atmospheric, surprisingly faithful recreation of Diana Gabaldon’s bestselling 1991 novel of the same name. HBO’s “Game of Thrones” may have kicked off the high-concept adaptation trend back in 2011, but Gabaldon’s book series predates the publication of George R.R. Martin’s “A Song of Ice and Fire” opener by five years, and aside from ambitious scope and historical settings, the two shows have little in common — beyond the fact that Tobias Menzies appears in both.

“Battlestar Galactica” mastermind Ron Moore is at the helm of this lavish production (set and shot amid the rolling valleys and frigid peaks of the Scottish Highlands) and much like that sci-fi epic, there’s a sense of meticulous care that permeates the series, which sees Claire Randall, a British army nurse from the 1940s, mysteriously swept back in time to 18th century Scotland, where she becomes embroiled in all manner of political and romantic conflicts.

Aside from a flashback to Claire’s time in a World War II field hospital — conceived by Moore to give viewers a sense of the character’s resourcefulness and tenacity without the need for exposition — the series premiere condenses the first 70 pages of the novel with little deviation, and the episode progresses at a resolutely slow burn, taking the time to establish characters, dynamics and historical context instead of blindly charging towards the next set piece. While the breathing room may make some viewers antsy, the series rewards patience, ratcheting up the simmering tensions between allies and enemies until conflict erupts in unexpected and often brutal ways as episodes progress.

At its core, “Outlander” is a love story, and the series is strongest when exploring the complexities of human relationships, from the tentative steps Claire takes to reconnect with husband Frank after their separation during the war, to the chaste but burgeoning chemistry between our heroine and her Scottish companion in the 1700s, Jamie Fraser. Throw in the added complication of Frank’s ancestor, a ruthless British army captain who goes by the name “Black Jack” Randall and shares a twisted history with Jamie, and you have a set-up that’s ripe for turmoil.

Where “Outlander” most notably differentiates itself from the majority of genre cable fare is through its strong female protagonist, something that should help Starz appeal to a largely untapped demographic. While the cabler’s recent hits like “Spartacus,” “Da Vinci’s Demons” and “Black Sails” all feature compelling female voices, those stories were undeniably driven by male perspectives and appetites. Building on the success of “The White Queen” (although “Outlander” was in development before Starz aired the historical BBC drama), “Outlander” is undoubtedly Claire’s story, with the luminous Balfe anchoring practically every scene, her steely gaze and quick wit positioning her as an ideal entry point to the foreign and barbaric land she finds herself trapped in. Perhaps even more refreshing is the show’s willingness to portray female gratification and embrace its protagonist as an empowered sexual being in a way that’s sadly still rare to see on television, where many members of the fairer sex are portrayed as the Madonna or the Whore with no room to explore the spectrum of desires in between.

Rape is a constant threat as a consequence of the time, yet Claire is never presented as a helpless victim, nor are female bodies in the series used purely for titillation. The sex is steamy, but equal opportunity (if anything, the camera is far more apt to linger on Heughan, a magnetic force of nature who grows more compelling as more of Jamie’s backstory is revealed). Women are still treated as chattel and chess pieces by the men of the period, but by giving its female characters voices, intellect and agency (a novel concept!), “Outlander” illustrates that female protagonists don’t need to be brutalized in order to give them strength, nor to emphasize the stakes of the world they inhabit.

Starz made the first six episodes of the series available to critics prior to premiere, and while every installment has its charms, the sixth hour provides some of the most riveting, visceral scenes ever to grace the small screen, proving that “Outlander” has a clear sense of identity and a willingness to push boundaries in a way that’s certain to leave a mark. Whether the show will succeed or fail is impossible to predict, but “Outlander” has already set itself apart with a story as unique and confident as the woman at its center.