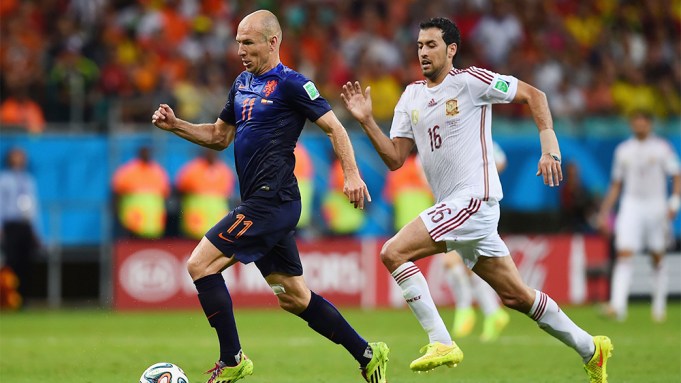 Viewer interest seems to be strong for this year’s World Cup, with Univision and ESPN averaging a combined 7.5 million television viewers — up vs. four years ago — for their Group Play coverage since Thursday.

According to in-home viewing estimates by Nielsen, Univision (along with its simulcast on Univision Deportes) averaged 3.8 million viewers for 11 matches Thursday through Sunday, pacing ahead of Univision’s 2010 coverage of the Cup at the same point last year by 45%.

The Brazil-Croatia kickoff game on Thursday remains the most-watched game of this World Cup, averaging 5.1 million viewers on Thursday. Argentina vs. Bosnia-Herzegovina on Sunday averaged 4.9 million.

ESPN, ESPN2 and ABC have combined to average 3.74 million viewers through Sunday. This is a 2% increase vs. 2010, but it shoots up to 37% if you exclude the United States-England match on the second day of the tournament four years ago, which drew a whopping 13.13 million viewers.

The WatchESPN app has averaged 209,000 viewers for the first 11 matches, bringing ESPN’s total through 11 games to 3.95 million.

According to Univision, the network’s Spanish-language telecasts are outdrawing their English-language counterpart on ESPN in major markets Los Angeles, Dallas, Houston, Miami and Phoenix.