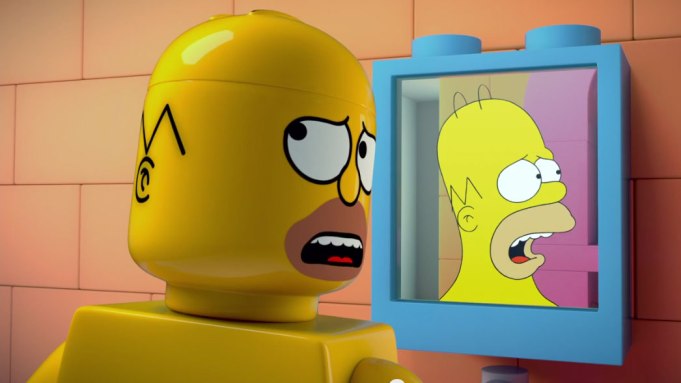 “Is it just me or does something feel weird today?” asks Bart Simpson in the new trailer for Sunday’s episode of “The Simpsons.”

Something is definitely off — the characters, the items and all of Springfield have been Lego-fied. The upcoming 550th episode of the cartoon, dubbed “The Simpsons’ Lego Spectacular,” finds Homer Simpson torn between two alternate realities: The Lego one and the 2D, hand-drawn one of usual. When Homer gets his hands on a magical board game, named Perky Patty Princess Shop, it reveals to Homer to 2D world, and he embarks on an adventure to fix the blocked-up Springfield.

It all looks similar to “The Lego Movie,” which combined 3D Lego animation with live action, whereas the episode incorporates 2D animation against the 3D. “The Simpsons” recently hit a ratings low, but it’s possible the Lego theme could help. “The Lego Movie” was a huge blockbuster hit, grossing $452 million worldwide and receiving rave reviews.

Fox had teased some of the episode before the release of the full trailer, and had even given a glimpse at the Simpsons-themed minifigures last month. The episode, “Brick Like Me,” will air May 4 at 8p.m. on Fox.