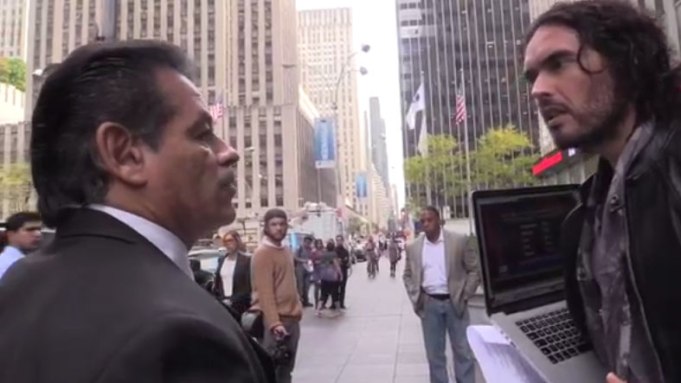 Russell Brand has been open about his criticisms about Fox News in the past, and decided to take his issues right up to the headquarters.

The British comedian posted a video this week in which he took a cameraman to the Fox News headquarters in New York City to film some of his webcast “The Trews.” His filming was disrupted when a security guard approached him and instructed him to leave.

Brand asked the security guard who the building belonged to, and the man replied that it didn’t matter.

“Do you want to get arrested?,” the security guard asks Brand.

According to Brand, Sean Hannity has booked an appearance for him on his show “Hannity,” but had canceled it, which Brand took issue with.

“Russell Brand was never booked on the show and therefore couldn’t have been canceled,” said “Hannity” executive producer Porter Berry in a statement.

Brand went on to go inside the building, asking for a tour. Unsurprisingly, his request was denied. He also spoke with the receptionist, attempting to leave a message for Hannity.

“Whatever the subject is—Islamophobia or it’s just the freedom to be in a lobby, Fox is a difficult organization to work with,” Brand says outside the building near the end of the video.

Brand has been outspoken in his political views in the past, especially his issues with Fox News. In July, he posted a video slamming how Hannity spoke about the Israel-Gaza conflict.

Hannity tweeted about the incident  on Thursday, calling Brand a “deranged creepy stalker.”