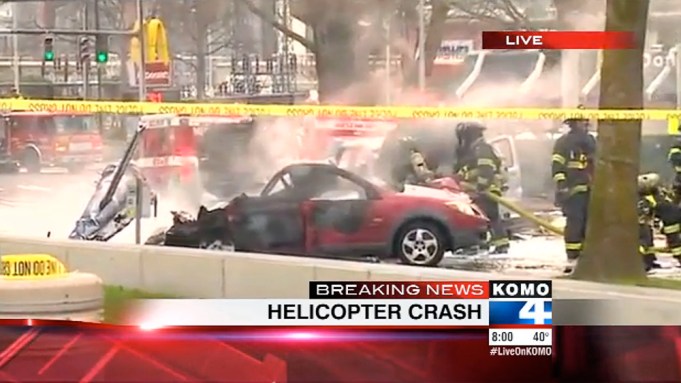 Two people were killed when a news helicopter for KOMO-TV crashed Tuesday morning outside its station near the Seattle Space Needle, sending clouds of black smoke over the city during the morning rush hour.

The Seattle Fire Department said in addition to the fatalities, a 37-year-old man who managed to free himself from a car at the accident scene was taken to Harborview Medical Center in critical condition. Hospital spokeswoman Susan Gregg said the facility had received no other victims from the crash.

The station says the helicopter apparently was lifting off from its rooftop when it possibly hit the side of the building and went down, hitting several vehicles on Broad Street.

The helicopter and cars exploded in flames.

Plumes of black smoke rose from the crash scene as rescue vehicles converged on the area.

Only the tail of the helicopter could be identified among the burned metal on the street next to the Seattle Center. Also among the wreckage were three burned-out cars.

An hour after the crash, firefighters had put out the fire and were cleaning up spilled fuel, which left a strong smell in the area.

In addition to being near the city’s iconic Space Needle in Seattle Center, the crash site is near the EMP Museum, the music and culture museum founded by Microsoft co-founder Paul Allen. Seattle Center is popular with tourists and locals, and is the site of many music and cultural festivals and sporting activities.

Other cities have experienced helicopter crashes as TV stations rush to cover the news from above major cities.

Two news helicopters collided in midair in Phoenix in 2007 as the aircraft covered a police chase, sending fiery wreckage plummeting onto a park. Four people in the helicopters were killed.

The crash prompted changes at the stations in how they operated their helicopter crews.