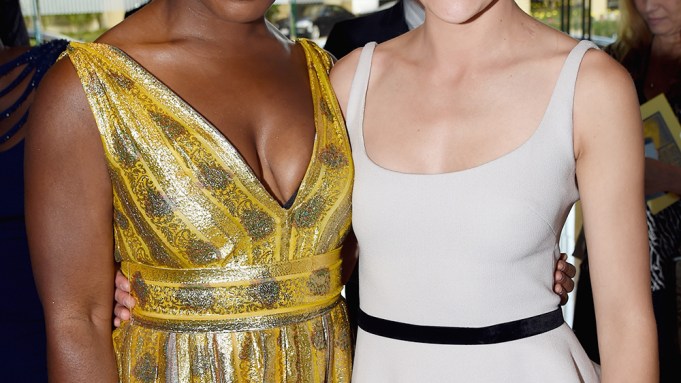 “Goodbyes suck,” but the cast of “True Blood” were in good spirits at the final season premiere for the HBO drama Tuesday night.

The show took its bow at the TCL Chinese Theatre in Hollywood, followed by a sprawling soiree at the Hollywood Roosevelt, where attendees accessorized with plastic fangs and temporary tattoos of vampire bites before striking a pose in front of tombstones and coffins with an undead companion.

On the red carpet, there was an air of nostalgia, but few tears — those were apparently reserved for the final table read, which took place earlier this week.

“It was really beautiful actually,” Stephen Moyer admitted. “We were all expecting certain things out of it and then once you’re in there. … People turned up who we hadn’t seen for ages; Alan [Ball] was there. That stuff’s really deep — we’re sitting in the same room that we’ve been reading in for seven years, and it was really great.”

“We’re still working 15 hours a day, so there’s not been a lot of reflection yet — I’m just more worried about whether or not I’ll know my lines tomorrow,” Anna Paquin joked.

While the stars all agreed that Kristin Bauer van Straten is the set’s resident weeper — “she’s been crying for months now; our concern is just keeping her hydrated at this point,” Joe Manganiello quipped — a touch of melancholy seemed to creep into many of the actors’ voices as they reflected on the show’s impending conclusion.

“I feel so lucky that this happened to me,” Chris Bauer confided. “Andy Bellefleur had one scene in the pilot … the character’s not the same and I’m not the same at the end of this run. I saw ‘Star Wars’ in this theater in 1977 when I was a kid, and now I’m gonna go watch the screening in here. This is the dream come true time. How do you describe that, except to say ‘thank you’?”

“It’s still a little bit surreal — now that I’m here, it’s like, ‘this is the last premiere, so I’d better have fun,'” Rutina Wesley said. “I’ve gained an extended family because of this show, and I’ve learned a lot from them — I’m very, very grateful.”

Moyer directed the seventh season premiere — the Brit’s third foray behind the camera — and Deborah Ann Woll admitted that she was in awe of her co-star’s multitasking skills: “He’s fantastic and it’s not an easy episode. Premieres are always really difficult; there’s a lot going on from emotional scenes to fight sequences and he handled all of it like a pro — he is a pro!”

Manganiello — whose own directorial debut, documentary “La Bare,” premieres Wednesday night — previewed that fans can expect a fittingly high body count as the season comes to a close. “There’ll be a big, Shakespearean pile of bodies,” he teased, telling Variety that he was happy to see Sookie and Alcide finally get together in last season’s finale.

“He’s in love with that girl and he has been for a long time. [He’s] the guy who never intentionally hurt her, didn’t have a duplicitous nature — he’s a real man, so I was happy to see that happen, especially after the coitus interruptus of the barfing-on-the-shoes incident,” he laughed.

Season 7 will see its share of challenges for the couple, however. “The town is under attack, everyone has kind of retreated into Bon Temps and is hunkered down trying to defend themselves against these rabid, Hep-V vampires, so [Alcide] is now a part of the town,” Manganiello said. “There will be some sexiness going on at Gran’s house, and lots of blood and death and craziness — nobody stays happy for too long in Bon Temps.”

Since it’s customary for cast and crew members to take keepsakes from the set after a show wraps, Wesley admitted that she has her eye on one of Tara’s most iconic costumes to remember her time on “True Blood”: “They’re letting us keep our fangs, and I think I might keep a little costume piece, I’m not sure — maybe those really tight cutoff shorts I used to wear all the time in season 1; I’ll frame them,” she laughed.

As for whether there’s anything Paquin’s learned from playing supernatural magnet Sookie Stackhouse over the past seven years, the actress imparted a pretty sound piece of wisdom: “Don’t date vampires — they’re bad news.”

The seventh and final season of “True Blood” premieres at 9 p.m.  June 22 on HBO.