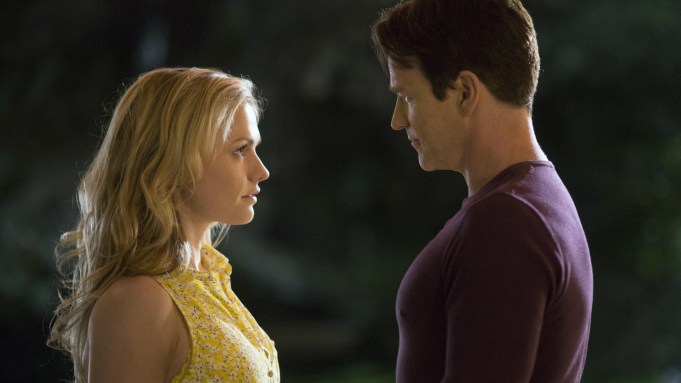 The panel kicked off with a goodbye video from the cast, thanking viewers for their support ahead of the series finale, and ended with a sizzle reel of scenes from the remaining five episodes of season seven (above), which sees Bill in dire straits after being infected with Hep-V, leaving Sookie racing to find a way to save him. Bill, meanwhile, means to “set her free,” implying that there may be a grand sacrifice ahead. Fans gave the cast and EP a standing ovation at the Q&A’s end.

There was a nostalgic air to the panel, punctuated with occasional tears as the cast reflected on the past seven years together, reminiscing about filming the pilot before teasing the show’s endgame.

“This season is about the love all these people share with each other — it’s really touching,” Buckner said, recalling the tough decision to kill Joe Manganiello’s fan-favorite character, Alcide. “I think we’ve really given these people their due. It’s our last season… this season had to be about Bill and Sookie. It’s not going to be exactly what you think it is, but Alcide had to go.”

Sookie and Bill’s relationship will be at the forefront of the last run of episodes, Buckner revealed. “This show started out and worked because of the chemistry they shared… they got married for us! I certainly felt that we had to come back to Bill and Sookie; how we’re coming back to them, we’re not telling you.”

Of the show’s final batch, he added, “It’s not done changing, it’s not gonna slow down any, there’s just a bit more focus on romance… We put last season’s issue to rest early on purpose. We know you love these characters, so we landed them in a place where we hope you guys will be okay not with getting them anymore.”

When asked what the actors recalled about filming the very first episode of the series, Trammell recounted, “I just remember that [Disney Channel show] ‘The Suite Life of Zack and Cody’ was shooting next door and we had all these naked, bloody people wandering around.”

Already known for being the most emotional member of the cast, Bauer van Straten admitted she had already cried “96 times today,” and that she struggled the most with filming her final scene with Alexander Skarsgard, since Pam and Eric shared the most profound connection with each other. “I’ve been crying for about a year, thinking about when that scene would come… I thought he would be rock solid, so when I saw him crack… I just tried to get out of there.” Instead of saying goodbye, they agreed to say “see you tomorrow,” but that apparently didn’t stop the tears from coming when the duo made their exits.

While Tara was the season’s first fatality, Buckner teased that “you haven’t seen the last of Rutina yet,” and when her true final scene came, the actress admitted, “It hit me all at once… It was beautiful, it was sad, it was on to new things.”

“In typical ‘True Blood’ fashion, I wrapped at 4 a.m. out in the woods somewhere,” Woll laughed. “We had a moment where at least half the cast were together, 17 people wrapped at once.”

“It was a beautiful scene, I thought it was appropriate,” Ellis agreed.

“We were just in each other’s arms and mourning, but celebrating too,” Preston added. “We started crying at the table read for that episode.”

Moyer said that saying goodbye to the crew was the most emotional moment for him on set, since he knew he’d be seeing the cast again at Comic-Con, but admitted, “This is the last time we’ll all be together in this guise, so we’re still mourning.”

A blue-haired Paquin said that on her last day, the crew was on location and so “the second that we wrapped, everyone had to pack their shit up and get out of there as fast as possible because we weren’t on any of our regular sets,” which was a somewhat jarring way to end.

Bauer van Straten also addressed “True Blood’s” recent Sarah Palin controversy, after the Republican turned down the chance to make a guest appearance on the show. A fictional Republican fundraiser in the most recent episode took a few shots at the GOP (including giving Pam a big-haired makeover that caused her to refer to herself with a word that was a profane play on “Republican”), prompting Palin to tell Breitbart, “The brilliant minds of ‘True Blood’ were brazen enough to ask me to do a cameo on their show, apparently so they could insult a conservative woman in person instead of just all conservative women in general. Their offer wasn’t presented in any negative way, perhaps to benefit from a surprise factor after the guest appearance. I turned them down anyway.”

“She’ll weigh in on anything,” Bauer van Straten laughed. “Being an animal rights person… when I first heard of her, she was just the wolf-killer lady from Alaska… it’s sweet many, many years later that I’ve made her angry. I did have fun doing it.”

Camp’s Sarah Newlin has a big part to play in the show’s final arc, and teased of her character’s fate, “I think I get what I deserve.” Buckner agreed, “I had to explain it to her boyfriend when he saw the punishment on set, ‘no, she deserves this!'”

Of Sam’s storyline in the final episodes — as well as his future with Nicole, Trammell teased, “Sam’s story has been about family for the past few years… [Nicole] has a very objective view of this town and how insane it is. We’ll see how committed I am to her and how committed she is to staying.”

Preston’s Arlene, on the other hand, will be enjoying the company of new vampire Keith. “I don’t think you introduce a hot vampire on ‘True Blood’ without doing something with him… I feel like this season I got the real ‘True Blood’ experience, I got a vampire exploding in my crotch… [and] there’s something coming up with Arlene and Keith that’s unlike anything I’ve had to do on camera before.”

As for which of her many love interests Paquin thinks Sookie should’ve ended up with, the star admitted that she has dodged the question for years for fear of offending one of the show’s many loyal factions, but admitted, “Charlaine [Harris] ended it with Sam [with Sookie] — that made a lot of sense, they can both exist in the daylight… I understand why she made that decision.”