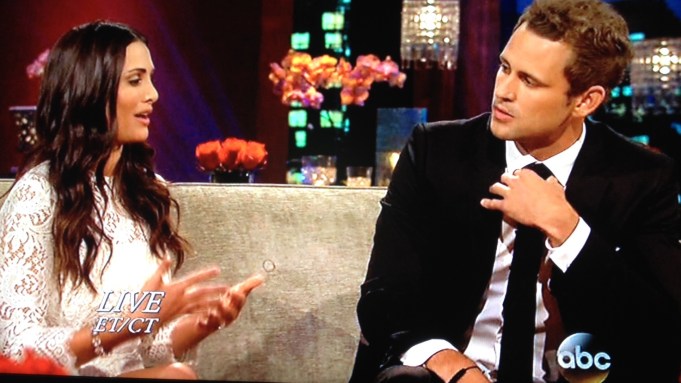 “The Bachelorette” contestant Nick Viall stunned his former TV flame on Monday Night by revealing to a live studio audience that he had sex with her during the 10th season of the popular series.

In discussing their brief relationship on “After the Final Rose,” an emotional Viall, who earlier tried but failed to talk to “Bachelorette” star Andi Dorfman, said the two were intimate before she decided to accept the marriage proposal of Josh Murray.

“If you weren’t in love with me…I’m just not sure why you made love with me, either,” Viall said softly.

“First of all, I think that’s below the belt,” Dorfman said, “that’s something that should be private and kept private.”

Read the Letter Nick Wrote to ‘The Bachelorette’

Viall, still obviously heartbroken, tried backtracking but it was too late.

“I’m not trying to put you below the belt…”

“You already have!” she snapped.

Host Chris Harrison, looking as startled as the giggling audience members, let Dorfman explain her rejection to Viall for a few minutes before taking the show to commercial break.

Dorfman appeared more at ease later in the broadcast when discussing her future with new fiance, Murray, who is a former professional baseball player.