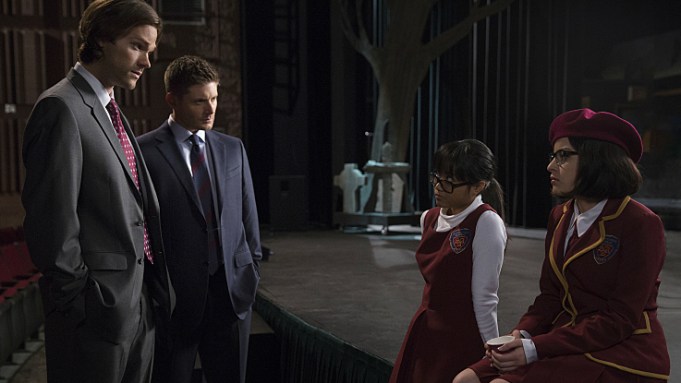 Ten seasons and countless monsters later, “Supernatural” celebrates its milestone 200th episode on Nov. 11, and Variety has an exclusive sneak preview of one of the episode’s most memorable musical numbers — one that serves as a fitting tribute to the show’s longevity.

In the episode, titled “Fan Fiction,” Sam (Jared Padalecki) and Dean (Jensen Ackles) investigate the disappearance of a teacher, but are stunned to learn that the school is putting on a musical based on their lives, building on the show’s tradition of breaking the fourth wall with another gleefully meta installment.

Co-executive producer Robbie Thompson wrote the episode and the musical’s lyrics, with a score composed by Christopher Lennertz and Jay Gruska. At a recent screening for the 200th episode, Thompson revealed his inspiration for the episode: “The show. When they told me I was gonna write it — I pitched pretty hard for this one, I really wanted it — I went back and watched the first five seasons of the show again. I’ve seen most of the episodes a handful of times, but I just watched it all in a row. I hadn’t watched it all the way through since I got the job, so to watch again, and now knowing Jared and Jensen and Misha [Collins] and Mark [Sheppard] and everybody else, you watch them grow up in front of your eyes. So I think the number one inspiration is the show. Number two is my wife; she’s a TV writer as well, but she’s a big musical theater kid… she really loves it, and her passion for it inspired me. Everybody in the [musical’s cast] is named after people in my wife’s theater group… they’re all people she did shows with.”

Check out the clip above, and read Variety‘s retrospective oral history of the show’s impressive road so far, featuring insights from Ackles, Padalecki and creator Eric Kripke.

“Supernatural” airs Tuesdays at 9 p.m. on The CW.