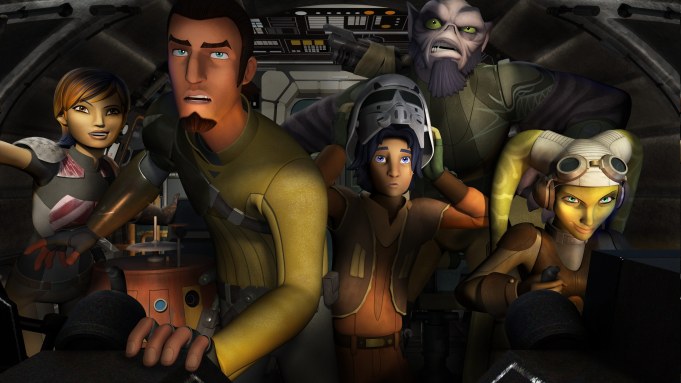 The marketing force is strong with “Star Wars Rebels.”

Disney will promote the Oct. 13 launch of the new animated series on Disney XD starting Sept. 29 with a one-hour film “Star Wars Rebels: Spark of Rebellion,” available first for users of the Watch Disney XD app.

The animated film will then premiere on Disney Channel on Oct. 3 and Disney XD on Oct. 6 before the premiere of the “Star Wars Rebels” series on Oct. 13 on Disney XD.

Disney is giving the show a major push across its channels around the world, making it available in 34 languages in 163 countries.

The move to offer up the “Rebels” movie first on digital devices — tablets, smartphones, computers and set-top boxes – is an interesting one, however — one that borrows from the trend by studios to release homevideo titles two weeks earlier before their discs hit traditional retail shelves through Digital HD.

Doing so will give Disney several more weeks to eventize the launch of its new “Rebels” series by building buzz on social media as viewers react to the film and carry the digital word-of-mouth on through the more traditional release strategy on its cable networks.

Either way, Disney is providing a glimpse of how it plans to promote its upcoming “Star Wars” movies, beginning with next year’s “Star Wars: Episode VII.” “Star Wars Rebels” marks the first major launch of a “Star Wars” project since Disney acquired Lucasfilm for $4 billion in 2012.

Naturally, Disney will also make the “Rebels” movie available for purchase, starting Oct. 4 on Apple iTunes, Amazon Instant Video and Google Play, before selling it on DVD on Oct. 14. The DVD will include the movie, a free Ghost 3D model ship, four “Star Wars Rebels” shorts, and additional content that takes viewers deeper into “Rebels.”

The “Star Wars Rebels: Spark of Rebellion” film was shown at San Diego Comic-Con, introducing the look of the “Rebels” series to fans for the first time and the crew of the starship Ghost — cowboy Jedi Kanan, ace pilot Hera, street-smart teenager Ezra, the “muscle” Zeb, warrior firebrand Sabine, and cantankerous droid Chopper — as they rebel against the Empire and confront new villains.

“Rebels” takes place five years prior to the 1977 “Star Wars,” when the Jedi are in hiding. The series’ designs are influenced by the work of original “Star Wars” concept artist Ralph McQuarrie.

Dave Filoni (“Star Wars: The Clone Wars”) created the series with Simon Kinberg (“X-Men: Days of Future Past”), and Carrie Beck, producing it with Lucasfilm Animation.