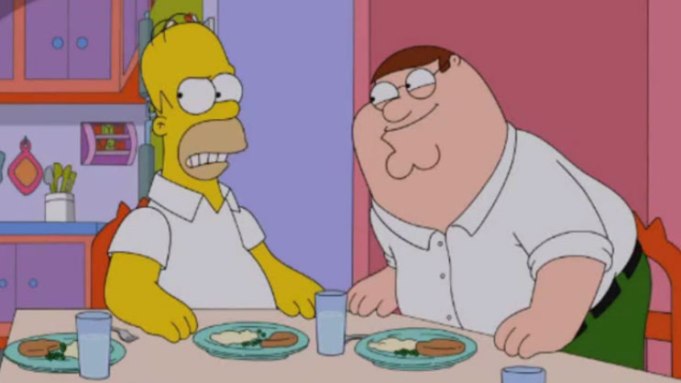 Comic-Con gave fans a sneak peek at the highly-anticipated “The Simpsons”-“Family Guy” crossover episode on Saturday, and now the five-minute trailer has hit the web, giving everyone a look at the Simpsons and Griffin families colliding.

The episode, airing Sept. 28 and fittingly titled “The Simpsons Guy,” has the Griffins accidentally ending up in Springfield, where Peter Griffin makes the acute observation that “everyone around here looks like they have hepatitis.”

They meet up with the Simpsons, and Homer and Peter unsurprisingly bond over donuts while Bart introduces Stewie to pranks calls (to the horror of Stewie’s prank call victims). However, Homer and Peter get into an argument over Pawtucket Patriot Ale and Duff Beer and it quickly escalates, threatening the new-found friendship.

Throwing more to the animation fans, Bob of “Bob’s Burgers” also makes an appearance. The “Family Guy” panel at Comic-Con teased even more of the upcoming season, which will include a special Christmas episode in which the guys try to get Jesus laid (“We’re going to hell,” said Mike Henry in Cleveland Brown’s voice) and a guest appearance from Liam Neeson. Find full coverage of the panel here.

Those who can’t wait for the crossover can at least get their “Simpsons” fix with a full series marathon on FXX, airing from Aug. 21 through Sept. 1.