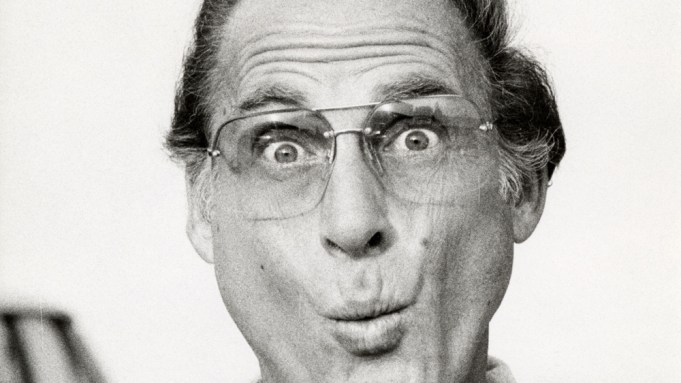 Sid Caesar, one of the first stars created by television via his weekly live comedy program “Your Show of Shows,” died Wednesday at his home in Beverly Hills after a brief illness. He was 91.

A two-time Emmy winner, Caesar (above in a photo with Red Buttons and Mickey Rooney) and his partner Imogene Coca broke comedic ground with the 90-minute live program: It didn’t rely on vaudeville or standup material but rather on long skits and sketches written by an impressive roster of comedy writers including Mel Brooks, Woody Allen, Neil Simon, Larry Gelbart, Carl Reiner, Lucille Kallen and Mel Tolkin.

Reiner said Caesar had an ability to “connect with an audience and make them roar with laughter.”

“Sid Caesar set the template for everybody,” Reiner told KNX-AM in Los Angeles. “He was without a doubt the greatest sketch comedian-monologist that television ever produced. He could ad lib. He could do anything that was necessary to make an audience laugh.”

“Your Show of Shows” was “different from other programs of its time because its humor was aimed at truth,” Simon once observed. “Other television shows would present situations with farcical characters; we would put real-life people into identifiable situations.”

Following Caesar’s glory days in the ’50s, however, he made a precipitous decline into alcoholism and barbiturates, a self-described “20-year blackout” from which Caesar finally recovered and subsequently related in his 1982 autobiography “Where Have I Been.” “At my worst, I had been downing eight Tuinals and a quart of Scotch a day,” Caesar recalled of his darkest days. “When I was awake I’d think of nothing but ‘I must do it faster, kill myself faster.’ I’d get up to take pills just to go back to sleep. I had no friends. My life was over.”

Sidney Caesar was born of immigrant parents in Yonkers, N.Y. As a youth he aspired to a musical career and practiced the saxophone, which he later studied formally for a brief time (along with the clarinet) at Juilliard. He worked for several orchestras including those of Charlie Spivak, Claude Thornhill and Shep Fields.

After enlisting in the U.S. Coast Guard prior to WWII, he wrote sketches for “Six on, Twelve Off,” a Coast Guard musical revue. Then Coast Guard officer Vernon Duke heard Caesar perform one of his foreign-language double-talk monologues (a later Caesar trademark) for the amusement of his fellow mates and hired him for a comic role in another Coast Guard musical, “Tars and Spars.”

It was while performing this show that he befriended producer Max Liebman, who cast him in the Columbia Pictures film version of the musical. After Caesar’s discharge from the armed forces, Col hired him at $500 a week but used him only in one film, “The Guilt of Janet Ames.”

After a year of working in Hollywood, he returned to New York and made his first nightclub appearance at the Copacabana. Joseph Hyman hired him for the Broadway revue “Make Mine Manhattan,” for which he received raves (he was “the most original item on the program,” wrote the New York Times reviewer). And he received a percentage of the show’s profits — almost unknown for a young performer. He won the 1948 Donaldson Award for the musical.

The following year Caesar made his television debut in Liebman’s “Admiral Broadway Revue,” where he met comedienne Coca. He was hailed as the find of the year and earned a princely $900 a week. But the show lasted only 19 weeks, shuttered because of high production costs.

But on Feb. 24, 1950, NBC launched “Your Show of Shows,” a revue of comedy sketches, ballet, modern dance, popular music and operatic selections. Directed and produced by Liebman, the program was broadcast live in front of an audience. Coca co-starred with Caesar, who was then receiving $4,000 a week for his services.

The show was an immediate success and was to become one of the most influential programs in TV’s golden era, launching the careers of Carl Reiner and Howard Morris, as well as the enviable team of writers including Simon, Brooks and Gelbart.

In 1954, when the ratings began to slip, the program was trimmed and renamed “Caesar’s Hour.” Coca was replaced by Nanette Fabray. The change enabled Caesar to last  three more years on television. He was nominated for Emmys every year from 1951 to 1958 and won two.

The pressures of a live weekly TV show took its toll on Caesar, however. Success came so fast, he recalled, that “I lived in dread that some night onstage … I would be found out.”

“I know of no other comedian, including Chaplin, who could have done nearly 10 years of live television,” said Brooks. “Nobody’s talent was ever more used up than Sid’s.” Over the years, “Television ground him into sausages … until finally there was little of the muse left.”

For the next few years, Caesar continued to make club appearances, starred in the Broadway musical “Little Me” and toured with Neil Simon’s “Last of the Red Hot Lovers.” His movies included “It’s a Mad, Mad, Mad World” and Brooks’ “Silent Movie.”

But his addiction took its toll, and until he came out of it in the late ’70s, Caesar gradually disappeared from the scene. In the early ’80s, he hosted “Saturday Night Live” and toured with Coca in a stage show recalling some of the better “Show of Shows” material.

He also did a considerable amount of work in supporting and guest turns on film and TV. He was in “Grease” and “The Cheap Detective” in 1978, in Brooks’ “History of the World: Part I” in 1981 and he made two appearances on “Love Boat,” to name just a few of his credits from the period.

In 1995 he drew an Emmy nomination for his appearance on Diane English sitcom “Love and War.” He had quite a year in 1997, at age 75: He appeared on “Life With Louie” and “Mad About You” on TV, drawing an Emmy nom for the latter, and in the film “Vegas Vacation,” and he joined fellow TV icons Bob Hope and Milton Berle at the 50th anniversary Primetime Emmy Awards, where the three drew a long standing ovation.

On a 2001 episode of “Whose Line Is It Anyway?,” he reprised his famous foreign dub skit, receiving an extended standing ovation by the crowd as well as a surprise birthday cake from the cast and crew.

His reign as the star of “Your Show of Shows” has been fictionally chronicled in the film “My Favorite Year” as well as in Simon’s Broadway comedy “Laughter on the 23rd Floor” and explored in the 2001 documentary “Hail Sid Caesar! The Golden Age of Comedy.”

As Coca once observed, “I’m tired of talking about ‘Your Show of Shows.’ But deep inside, I know I’ve done nothing as good since.”

Survivors include two daughters, a son and two grandsons.

(Carmel Dagan and the Associated Press contributed to this report.)