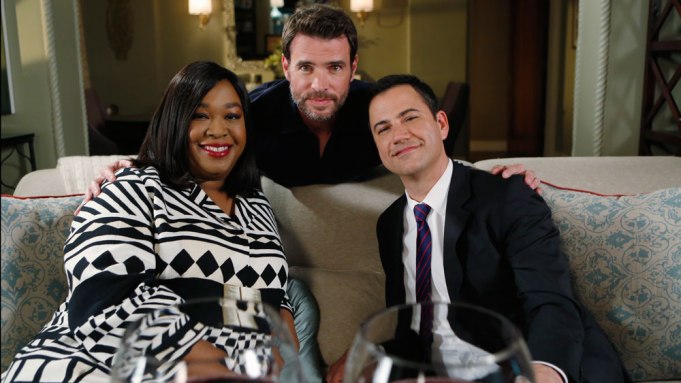 Shonda Rhimes doesn’t just want Gladiators to watch her hit ABC political drama “Scandal,” she wants them to be consumed by it.

The exec producer appeared on a “Scandal”-themed “Jimmy Kimmel Live!” on Thursday night following the dizzying season three finale. Although tight-lipped about Harrison’s fate, she did tease fans about Olivia’s future. And even though the show has its share of crazy moments, Rhimes said there’s one line it won’t cross: “We would not do alien abductions.”

During the hour-long special, “Behind the Scandalabra,” Kimmel joked that the fast-paced season wrapper had about three finales’ worth of action. “I always want to make the show something you can’t do other stuff while it’s on,” Rhimes explained. “You can’t fold laundry, you can’t yell at your husband.”

Rhimes was less upfront when asked the burning question on everyone’s mind: Will Harrison (Columbus Short) get killed? He was last seen at B613 with a gun to his head. “You know I can’t tell you whether or not he’s dead,” she said coyly.

She may have killed off more than her fair share of characters on “Scandal” as well as her other ABC shows, “Grey’s Anatomy” and the now-cancelled “Private Practice,” but Rhimes said it’s “always the worst call to make.” However, it’s in the name of good storytelling.

“You really have to have the topic sentence ready,” she said about telling actors about their characters’ upcoming deaths. “The first thing you have to say, ‘I’m sorry you’re going to die, and here’s how and why, and we love you.’ You can’t call and sort of back into it, because that’s a little bit cruel.”

She joked that the threat of being killed off may even be keeping Josh Malina in line.

“He’s very in line with me,” she said. “He does so many crazy pranks on our set — insane, insane, pranks, that I don’t know if everybody else thinks he’s in line. But he hasn’t pranked me yet and I’m very grateful for that.”

And what’s going to happen to Olivia (Kerry Washington)?

“She did quit her job,” she said. “You might watch her on the beach somewhere, we’ll have to see next season.”

When asked if Olivia was certain she wanted to leave D.C. with Jake (Scott Foley), Rhimes said “she’s not so sure.”

We’ll just have to wait until season four to find out.