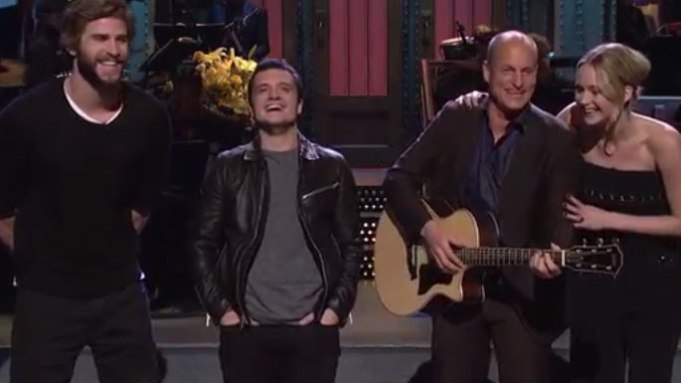 The stars of “The Hunger Games” volunteered as tributes and joined this week’s “Saturday Night Live” host Woody Harrelson in a surprise appearance.

Harrelson began his monologue by riffing on Taylor Swift, calling her out for naming her latest album “1989.”

“With all due respect to Miss Swift, I think I know a little bit more about 1989 than she does,” he said before going into a parody of her current single “Blank Space.”

It was after that that his “Hunger Games” co-stars Josh Hutcherson and Liam Hemsworth joined him on stage, followed by Jennifer Lawrence. Harrelson, however, was a little confused by Lawrence.

“I can’t believe it — the real Taylor Swift,” he said upon seeing the “Hunger Games” star.

Lawrence corrected him, then attempted her best Harrelson impression. When she struggled to get the words out, she saved the moment by pointing out, “You’re always so stoned.”