Event, which begins Sept. 19, will also feature new mazes based on 'The Walking Dead' in L.A. and Orlando 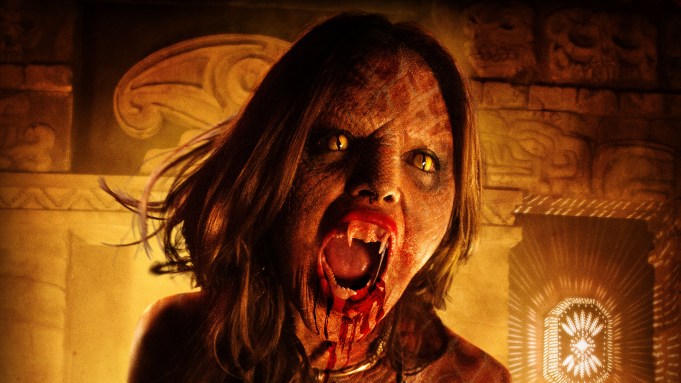 The vampires of Robert Rodriguez’s “From Dusk Till Dawn: The Series” are headed for Universal’s Halloween Horror Nights.

Rodriguez’s El Rey Network has paired up with Universal Studios Hollywood and Universal Orlando Resort to design mazes around the show, re-creating locations like the series’ nightclub the Twister, located just over the Mexican border and above cursed ancient ruins, where serpent-like vampires known as Culebras will torment guests.

Over the years, studios and TV networks have increasingly turned to the annual event, which transforms Universal’s theme parks in Los Angeles and Orlando into a nightly scarefest, to promote their properties.

AMC returns again to create mazes based on the fourth season of “The Walking Dead.” In fact, it will be the show’s third consecutive year in which it will have a maze at the event, with this year’s attraction sending guests through Terminus, the sanctuary seen at the end of the series.

Halloween Horror Nights begins Sept. 19. Watch Rodriguez introduce the maze (above) and a Q&A with the cast, including leads D.J. Cotrona, Zane Holtz and Wilmer Valderrama (below).

Based on the film of the same name, “From Dusk Till Dawn: The Series” revolves around a bank robber and his violent, unpredictable brother who are wanted by the FBI after a bank heist leaves several people dead. They fight for survival when they must fend off vampires in the club. The series adds new characters and backstories that expand the Mesoamerican mythology behind the creatures inside the Twister.

“Universal Studios’ Halloween Horror Nights event is the ideal platform to take fans of ‘From Dusk Till Dawn’ to literally experience the terror of stepping into the show,” Rodriguez said. “It has been an incredible opportunity to work closely with the Creative teams at both Universal Studios Hollywood and Universal Orlando Resort to bring this maze to life with such detail and authenticity. This maze will capture the visceral excitement and thrills of the series, and I can’t wait to experience it myself.”

Rodriguez is the founder and chairman of El Rey Network that launched as a 24-hour English-language cable network in December.

“Robert Rodriguez’ genius in pushing the boundaries of the horror genre is a perfect pairing for ‘Halloween Horror Nights’ as we continue to intensify our event with the most credible horror voices within the entertainment industry,” said John Murdy, creative director for Universal Studios Hollywood and executive producer of Halloween Horror Nights.