Behind the Scenes of Animal Planet’s Puppy Bowl 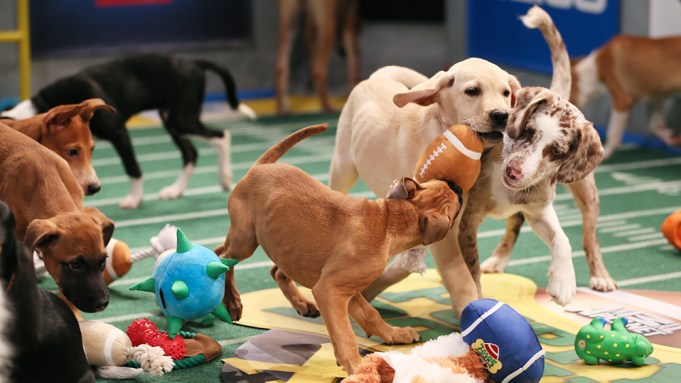 Outside of the network that carries the NFL’s big game, no media outlet gets more mileage out of Super Bowl weekend than Animal Planet with its Puppy Bowl.

The pre-taped special that began as a tongue-in-cheek alternative to the broadcast that is typically the most-watched TV event of the year has evolved into a year-round franchise for the Discovery Communications cabler and a social-media dynamo. As the event marks its 10th anniversary, the production process on Puppy Bowl X is almost as intricate as the effort that goes into the live Super Bowl telecast.

Animal Planet has gone into overdrive this year with enhancements to its Feb. 2 special, most of which are designed to make it more than a one-day event. The new additions this year include the launch of a Fantasy Puppy League venture, an amped-up halftime show starring YouTube sensation Keyboard Cat, online voting for the Bowl’s MVP and penguin cheerleaders.

It all adds up to a cute overload that is Animal Planet’s single-biggest moment of the year on the pop culture stage — as well as being incredibly sponsor-friendly. The 2013 edition averaged 12.4 million viewers across the 12-hour marathon airing of the two-hour special.

“Puppy Bowl was a sleepy phenomenon that people were excited about, but we knew we had the germ of an idea,” said Rick Holzman, exec VP of programming and strategy for Animal Planet and Science. “Every year since then the project has taken on additional legs — forgive the pun.”

Animal Planet’s creation has gained so much traction in the last 10 years, according to execs, that it’s no longer an event people flip to during Super Bowl commercials; it’s two hours of television that has amassed a fanbase of its own, allowing the net to pump more energy into the production.

This year’s special will air six times over the course of 12 hours, starting at 3 p.m. ET, with new content added for each airing.

The 2014 Puppy Bowl was shot Oct. 2-4 at Chelsea Broadcast Center in Manhattan. The breeds of dogs represented on the set made it a global village: Old English sheep dogs, Italian greyhounds, American Eskimo dogs, Siberian huskies, spaniels and pitbulls, among others.

Toporoff directs a team of 49 Animal Planet staff members and 48 volunteers to wrangle all of the action on the 10-foot by 19-foot gridiron that is dotted with doggie toys to keep the players engaged. The first day of shooting was devoted entirely to kittens and cats, the second exclusively to puppies, and the third to penguins and miscellaneous critters.

The puppies are 12 to 21 weeks old by the time they arrive on set, and this year’s competitors have come from 33 different shelter and rescue groups in 18 states and Puerto Rico. Coinciding with the net’s pro-adoption message, all of the animals that appear in the Puppy Bowl — except for the penguins, which were borrowed from the Columbus Zoo and Aquarium — are available for adoption.

As of Jan. 20, all but two puppies have been adopted. All other animals have found homes, according to execs, and usually do by the time Puppy Bowl airs.

Using 10 cameras and five GoPro’s to document the action — including hidden cameras and jibs — Toporoff said the shooting process entails “lots of potential chaos which is remarkably controlled.” Of the more than five dozen puppies, no more than 12 to 15 of them are allowed on the field at once, and waves of players are circulated every 20 minutes.

Players on the bench, so to speak, are allowed to nap or play with the staffers who are assigned to watch each dog for the day. If that sounds like a dream job, that’s because it is.

“You can’t help yourself, you binge on puppies,” said Toporoff, who always has at least one puppy in her sweater or on her lap while in the control room. “We have an exceptionally avid fanbase in our production crew, so there are moments when we don’t want to part with them to give them their 15 minutes of fame.”

The Puppy Bowl players are untrained dogs, given their age, and that means that there’s unavoidably a great deal of pooping on the field. Toporoff said the pups defecate as much as every 20 seconds at times, but it’s easy to fix it all in post with careful editing. And she has no interest in working with camera-ready canines.

“The less trained, the better,” she said. “That’s what makes for adorable television in this case — if puppies are falling asleep on the field, we love it.”

Certain production assistants are assigned the brave task of poop duty. Puppy Bowl referee Dan Schachner will usually call a personal foul on a puppy only once during the game, because Toporoff wants to keep the broadcast relatively clean.

Schachner is the only human face continually attached to Puppy Bowl, and he’s just as much a part of the broadcast as the four-legged players. As the one and only ref, his job is to keep things under control — just like the refs in that “other Sunday game.”

Puppy Bowl penalties include all the NFL puns you can think of, including paws interference (instead of pass interference), rough sides (instead of off sides) and dog-collar tackle; as well as some unique to Animal Planet, such as whining, napping, howling, illegal bathing and premature watering of the lawn.

The gameplay is modeled, more or less, after the NFL’s Super Bowl, with stops like halftime, as well as fun nods and Easter eggs, such as blimps, sideline fans, trivia, sponsors and live-tweeting.

There are never a set number of toys on the field, but Schachner said the ones that get the most action are those that are the loudest or the closest to resembling sausages. As a point of habit, the Animal Planet team rotates toys just as frequently, if not more, than they rotate the puppies to keep the players stimulated.

Schachner said he does his best to maintain a semblance of sportsmanship on the field. He talks fondly of deciding the call for Puppy Bowl VIII’s first-ever double touchdown, in which two players crossed the same end zone at precisely the same time.

“They had to go back and replay the video to make sure they actually crossed the goal line at the same time — and they did,” he recalls. “I say it’s like as rare as a double rainbow; it’s just one of those beautiful, beautiful moments in life, and to watch it back in slow-mo is pretty awesome.”

Animal Planet’s Holzman and Toporoff say one of the keys to the the Puppy Bowl’s rise in popularity was the net’s early adoption of social media in tapping into Facebook and Twitter to promote and drive audience engagement opportunities.

This year they’re hoping for plenty of OMG moments to drive tweets and posts, including recruiting Keyboard Cat to do a cover of Bruno Mars’ “Locked Out of Heaven” during halftime. Viral sensation Lil Bub will check in throughout the game from a Chicago studio, and first lady Michelle Obama and first dogs Bo and Sunny will kick off the event.

The Instagram hashtag #puppybowl will also give viewers a chance to submit pictures of themselves and their pets on TV in real time.

Holzman said they’ve pulled out all the stops for Puppy Bowl X — but the biggest challenge has been turning the broadcast into an event that is fresh all day long. Generally speaking, Holzman said Nielsen and social-media data have shown that Puppy Bowl viewers flip back and forth throughout the day because it’s “cute overload.”

But with the inclusion of the changing MVPs and the Instagram updates, which will coincide with real-time uploads, Holzman thinks Puppy Bowl is successfully making a shift from a single event to an ever-changing, engaging, all-day one.

“We love the fact that the show is lo-fi on air and very forward-leaning in the digital space,” Holzman said.

It’s no surprise that the success of Puppy Bowl has fed into other Animal Planet projects, as well as some “copycats” — with the premiere of this year’s Kitten Bowl on the Hallmark Channel, for example. But Animal Planet has turned it into a 24/7 franchise with the launch last April of its Animal Planet Live digital channel, which boils down to live-camera streaming of animals, many of them babies, doing cute things.

“Our kitten cams and our baby polar bear cams and baby sloth cams and reindeer cams for Christmas (on Animal Planet Live) all share some of the same DNA of Puppy Bowl — which is, ‘Hey, we all need a little dose of cute every now and then and sometimes it just happens,” Holzman said.