Continue to Variety SKIP AD
You will be redirected back to your article in seconds
Nov 17, 2014 8:45am PT

Inside the Savage Fight Scenes of ‘Penny Dreadful’ Season 1 (EXCLUSIVE) 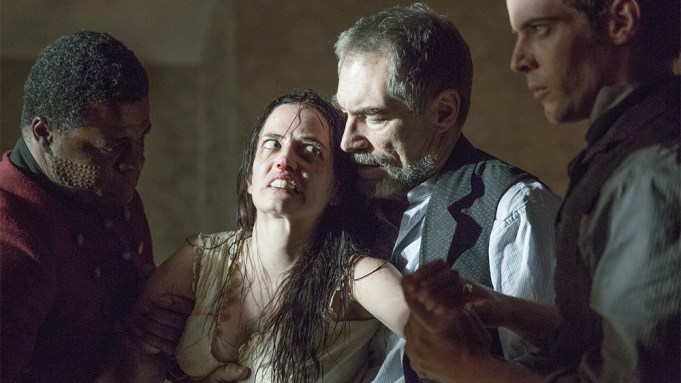 The first season of Showtime’s “Penny Dreadful” explored some of horror fiction’s most famous figures, spinning a provocative yarn that weaved vampires, werewolves and demons into the more recognizable stories of Dorian Gray and Victor Frankenstein for a gripping and gruesome monster mash-up. While viewers may have been lured by the chance to see such iconic characters inhabiting the same screen, they stayed for the powerhouse performances from the likes of Eva Green (who played Vanessa Ives, a character original to the series) and the lavish production values, which faithfully recreated the claustrophobic streets of Victorian London and staged some impressive set pieces, from grand theater productions to an elaborate fight scene between our heroes and a vampiric horde.

When dealing with battles between supernatural creatures, viewers have high expectations, so creator John Logan turned to stunt coordinator Pete Miles, whom he had worked with on “Skyfall.”

“You want an action sequence to have its own DNA and feel to it,” Logan explains in Variety‘s exclusive behind-the-scenes look at the stunt work on the series. “We wanted the ‘Penny Dreadful’ action sequences to be appropriate to the piece, so our fights are barroom brawls; they’re really ugly and violent — it has the feeling of savagery.”

In the video above, Miles and the producers explain what went into creating some of the most challenging action scenes of the first season, which had star Josh Hartnett channeling his inner cowboy and Timothy Dalton sustaining a minor flesh wound in the heat of battle.

“Penny Dreadful” returns to Showtime in 2015.