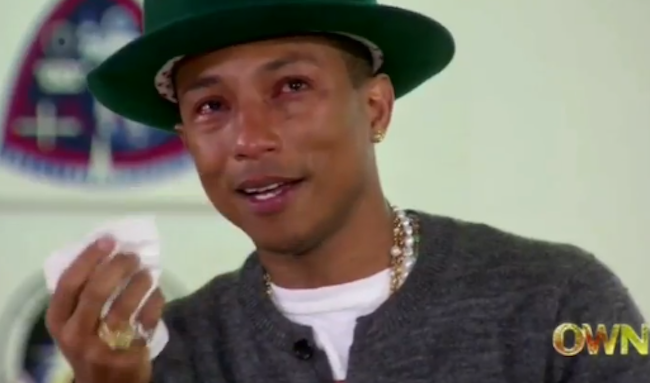 If anyone knows how to spark waterworks on TV, it’s Oprah Winfrey.

Winfrey, during an April 13 interview on OWN’s “Oprah Prime,” brought a very flattered Pharrell Williams to tears when she showed him a montage of fan-created videos from around the world inspired by his No. 1 hit song “Happy.”

The seven-time Grammy winner, clad in his signature Vivienne Westwood hat, was visibly moved by the footage as he wept and remained choked up for several seconds.

“Why am I crying on Oprah?” Williams laughed.

Williams discussed the “boom” of his upbeat anthem, featured on the “Despicable Me 2” soundtrack and his new album “G I R L,” and broke down as he humbly expressed his gratitude to those who have supported his career.

“It’s overwhelming because I love what I do and I just appreciate the fact that people have believed in me for so long that I could make it to this point,” Williams said through his tears.