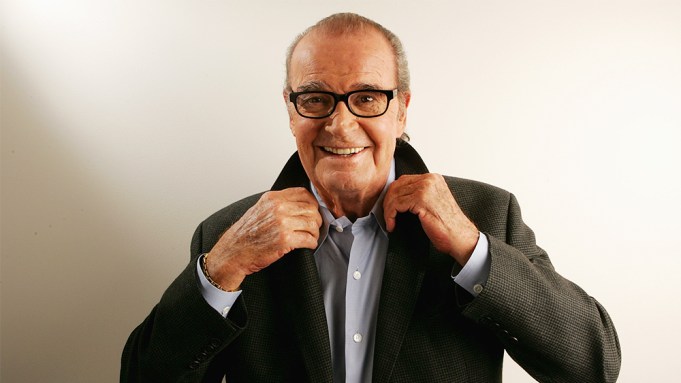 Amiable film and television actor James Garner, who starred in popular television series “Maverick” and “The Rockford Files,” died Saturday at his home in the Brentwood neighborhood of Los Angeles. He was 86.

Like many popular leading men of Hollywood’s heyday, Garner boasted all-American good looks and a winning personality that carried him through comedy and drama alike. Garner won two Emmys and racked up a total of 15 nominations. He had his greatest impact in television, first on “Maverick” in the ’50s and then in the ’70s on “The Rockford Files,” for which he won an Emmy in 1977. He later appeared in several quality telepics including “Promise,” “My Name Is Bill W.” and “Barbarians at the Gate,” as well as the occasional strong feature such as “Victor/Victoria” and “Murphy’s Romance,” for which he captured his sole Oscar nomination for lead actor.

Garner found his way to showbiz through a friend, theater producer Paul Gregory: He was employed cueing actor Lloyd Nolan during rehearsals of the Broadway-bound “The Caine Mutiny Court Martial.” Garner eventually copped a nonspeaking role in the 1954 production, where, he said, he closely studied the play’s star, Henry Fonda. After studying with Herbert Berghof, Garner landed a role in the touring production of “Caine.”

Back in Los Angeles in 1955, he secured bit parts in the TV series “Cheyenne.” Impressed, Warner Bros. gave him a screen test and a contract at $200 a week. He paid his dues in supporting roles in “Towards the Unknown,” “The Girl He Left Behind” and “Shootout at Medicine Bend” as well as some TV assignments.

He was first really noticeable in a role as Marlon Brando’s pal in “Sayonara,” after which he was assigned a supporting role in “Darby’s Rangers.” When “Darby’s” lead Charlton Heston walked off the film, Garner inherited his first starring role, but reviews were mixed.

The real boost to his career came in a role now indelibly associated with him, that of Bret Maverick in the comedic Western that ABC debuted in 1957; the role and the series fit his wry personality like a glove. Originally the story was to alternate between the Maverick brothers played by Garner and Jack Kelly, but “Maverick” quickly became all about Garner’s character, who used his wits to get out of trouble. Other actors revolved in and out including Clint Eastwood as a vicious gunfighter. “Maverick” led to a long relationship between Garner and its creator, Roy Huggins. The actor stayed with the series until 1960, when he quit over a dispute with Warners.

“I’m playing me,” Garner said about the role. “Bret Maverick is lazy: I’m lazy. And I like being lazy.”

Lazy or not, the actor shared the Golden Globe for most promising male newcomer in 1958 and earned his first Emmy nomination in 1959 for “Maverick.”

In the meantime, Warners was serving him frustrating fare like “Up Periscope” and “Cash McCall.” Taking advantage of a suspension during the Writers Guild strike of 1960, Garner sued Warners for breach of contract — and won — allowing him to be a free agent and demand more for his services.

He appeared in specials before landing a supporting role in “The Children’s Hour” with Shirley MacLaine and Audrey Hepburn.

His roles in films got better: “Boys’ Night Out” and, especially, “The Great Escape” brought him his best notices. He said that he drew on his experience in the Korean War, during which he was the company scrounger, for the latter role.

For a time he seemed ready to inherit the aging Cary Grant’s romantic comedy leading man mantle with such films as “The Thrill of It All” (1963), “The Wheeler Dealers” and “Move Over Darling.” Arthur Hiller gave him a meatier assignment, in the satire “The Americanization of Emily,” opposite the then-red-hot Julie Andrews. He then nabbed the thriller “36 Hours” and a couple of indifferent comedies, “The Art of Love” and “A Man Could Get Killed.”

The films were now A-budget, but “Duel at Diablo,” “Mr. Buddwing” and “Grand Prix,” which gave him a yen for car racing, weren’t particularly memorable.

During this period he appeared in Westerns including “Hour of the Gun” (in which he played Wyatt Earp), comedy Western “Support Your Local Sheriff,” “They Only Kill Their Masters,” “Marlowe” and “Skin Game.”

But he really scored on TV, where, after the brief NBC Western series “Nichols” in 1971, he hit paydirt with comedic detective skein “The Rockford Files,” which ran from 1974-80 and won him an Emmy in 1977 and another four nominations.

Huggins teamed with Stephen J. Cannell for the detective series recycling many of the plots from “Maverick.” Many of Garner’s friends had recurring roles in the series, including Joe Santos and Stuart Margolin as his buddies. Margolin said at the time that Garner worked long shifts, did his own stunts and stayed to do off-camera lines for the other cast members. But his old injuries and pay disputes led Garner to call it quits even though the show drew high ratings on NBC.

He again essayed “Bret Maverick” for one season in 1981. But a bad back, lawsuits with MCA TV over “Rockford” syndication payments (he eventually settled, reportedly for several million dollars) and, eventually, heart surgery curtailed his ability to endure the rigors of a TV series.

He reteamed with Andrews in the Blake Edwards musical “Victor/Victoria” in 1982, and he landed a plum role opposite Sally Field in the comedy/romance “Murphy’s Romance” in 1985. He essayed an older Wyatt Earp in Edwards’ “Sunset” opposite Bruce Willis as Tom Mix and did the underwhelming “Fire in the Sky” in 1983. In 1994 he took a small role in the bigscreen version of “Maverick,” with Mel Gibson in the lead, giving the star a run for his money in the likability department.

In 1996 he starred as an ex-president opposite Jack Lemmon in “My Fellow Americans.” The best of his later work, however, came in television in such TV movie dramas as “Heartsounds” with Mary Tyler Moore in 1984, directed by Glen Jordan, who also guided him through “Promise” in 1986. In 1989 he was acclaimed for “My Name Is Bill W.” with James Woods. In the 1992 HBO film “Barbarians at the Gate,” the actor offered up a standout chewy performance. Quieter, but no less effective, was “Breathing Lessons” opposite Joanne Woodward.

His bigscreen career continued in the 2000s with the Clint Eastwood-helmed veteran astronaut comedy “Space Cowboys,” chick pic “Divine Secrets of the Ya-Ya Sisterhood” and 2004 hit tearjerker “The Notebook,” in which Garner and Gena Rowlands played the older versions of a couple portrayed by Ryan Gosling and Rachel McAdams.

On the smallscreen, Garner recurred on the ABC comedy “8 Simple Rules for Dating My Daughter” from 2003-05. He also voiced God for the short-lived NBC series “God, the Devil and Bob,” played the chief justice in CBS’ Supreme Court drama “First Monday” and portrayed Mark Twain in a 2002 Hallmark adaptation of Twain’s novel “Roughing It.”

Born James Bumgarner in Norman, Okla., he left high school to become a merchant seaman before moving to Los Angeles, enrolling at Hollywood High and then returning to Norman, where he joined the Oklahoma State National Guard.

He briefly went to work in his father’s carpeting business in Los Angeles until being called for duty in the Korean War. He served more than a year in the Korean peninsula and was awarded the Purple Heart before his discharge in 1952. He studied business administration at the U. of Oklahoma but left after a semester, ready to move towards acting.

Garner starred with Mariette Hartley in a series of noted commercials for Polaroid in the 1970s.

He won the Screen Actors Guild’s Life Achievement Award in 2005.

Garner is survived by his wife, the former Lois Clarke, to whom he was married since 1956; daughter Greta “Gigi” Garner; and an adopted daughter, Kimberly, from Clarke’s first marriage.