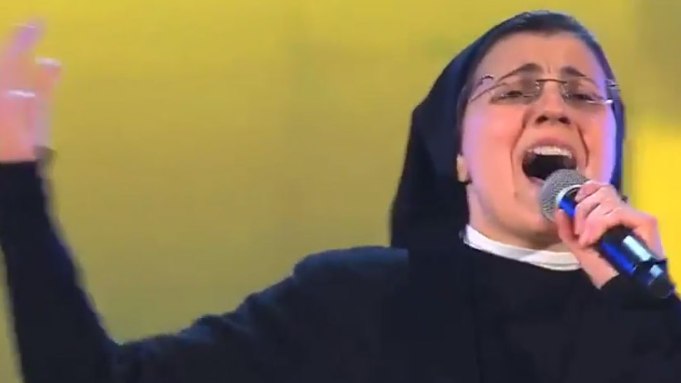 ROME – Italy’s singing nun, Sister Cristina Scuccia, is the winner of “The Voice of Italy,” after becoming a global sensation starting in March when her rendition of Alicia Keys’ “No One” in the talent show’s blind audition got more than 50 million hits on YouTube and appreciative Tweets from Keys herself and Whoopi Goldberg.

On Thursday night, wearing her nun’s habit, crucifix around her neck, and plain black shoes, the 25-year-old Sicilian nun won Italy’s version of “The Voice” with 62.3 percent of the vote.

“My presence here is not up to me, it’s thanks to the man upstairs,” she said before reciting the Lord’s Prayer onstage.

As the singing nun’s popularity soared in Italy and around the world, her performances on stage on Italy’s “The Voice,” aired by pubcster RAI, have included a cover of Bon Jovi’s “Livin’ On A Prayer” (see video), Cyndi Lauper’s “Girls Just Want To Have Fun,” and “What a Feeling.” From the studio audience her fellow sisters cheered her  on, often breaking out into dance moves themselves.

Scuccia, a member of the Ursuline Sisters of the Holy Family reportedly took her vows in 2010 after a rebellious adolescence. She has been training as a singer for years and previously auditioned for several other TV talent shows, including X-Factor in Italy.

She has said she was inspired to audition for “The Voice” by the words of Pope Francis to “get out onto the streets” in his call for a Catholic Church that is closer to common folk and their everyday lives.