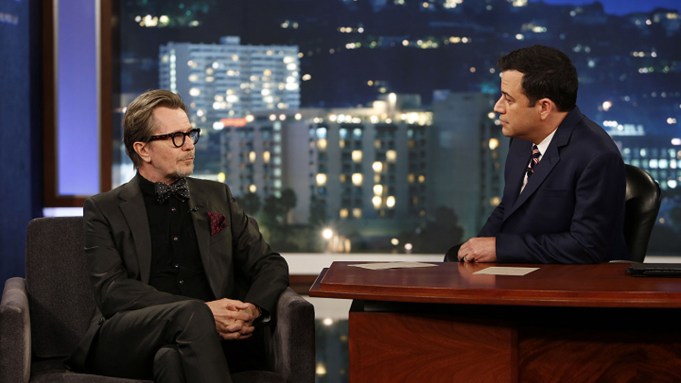 Oldman spoke haltingly at the start of his appearance, choosing his words carefully and sticking mostly to the script of the apology statement he issued late Tuesday to the Anti-Defamation League. But as he conversed with Kimmel — and as it became clear the audience was sympathetic, starting with the cheers and applause that greeted Oldman as he walked on stage — the British actor opened up to Kimmel.

“I’m a public figure. I should be an example and an inspiration, and I’m an A-hole. I’m 56. I should know better,” Oldman said.

In his interview in the current issue of Playboy, Oldman criticized what he deemed the hypocrisy of politically correctness in Hollywood. He defended actors Mel Gibson and Alec Baldwin, both of whom have spurred public outrage for using epithets in public encounters.

On Wednesday, the ADL further criticized Oldman’s apology, saying it was insufficient and only reinforced that he harbors stereotypical beliefs about Jews.

Oldman’s appearance on “Jimmy Kimmel Live” was scheduled before the controversy erupted, as the actor is on the promotional tour for Fox’s “Dawn of Planet of the Apes,” which opens next month. In speaking to Kimmel, Oldman sought to convey his sincere surprise at the the storm stirred by his comments and his understanding as to why they were offensive to many.

“I said some things that were poorly considered,” Oldman told Kimmel. “Once I had seen it in print I could see that it was offensive … insensitive … pernicious … and ill informed. Words have meaning, they carry weight long after you’ve said them, and I don’t condone or excuse the words I used in any context. i just basically shouldn’t have used them in any context. I have deeply injured and wounded great many people.”

While Kimmel thanked Oldman for not canceling his appearance in the wake of the furor, Oldman thanked the latenight host for giving him a platform of apologize. “This gives me the opportunity to say to those people (who were offended) from the my heart I am profoundly, profoundly sorry and deeply apologetic.”

Oldman also noted that the questioning in the Playboy interview veered into subject areas that he was not equipped to address, given that he is an actor, not a social commentator. “I stepped out of my area of expertise and I just landed both feet in a hornet’s nest,” Oldman said.

Kimmel, who is no stranger to accusations of racism and insensitivity in his humor, lightened the mood by telling Oldman: “I’m so happy someone has to apologize on this show and it’s not me for once.”