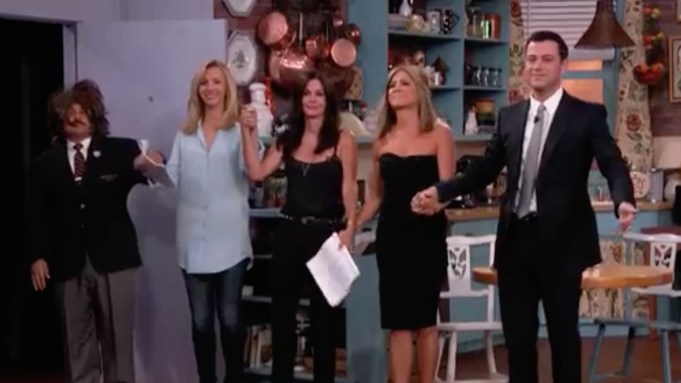 The five minute sketch, which followed Aniston’s guest appearance on the show, began with Kimmel telling the actress he was a huge fan of the ’90s sitcom and that he wanted to act out some “fan fiction” with her.  Shortly after, Cox and Kudrow surprised the live audience on Kimmel’s fake set of Rachel and Monica’s apartment (“it cost us $80,000 to build this,” he joked).

Kimmel played Ross in the sketch (David Schwimmer, Matthew Perry and Matt LeBlanc did not appear)  to the sexual admiration of his fellow “Friends,” who ‘performed’ jokingly in character as Rachel, Monica and Phoebe.

The surprise is said to be tied to next month’s 20th anniversary of the NBC show’s premiere. To further commemorate the occasion, a replica of the show’s Central Perk coffee shop will pop up in Manhattan in September, serving free coffee and featuring appearances from James Michael Tyler — who played Central Perk’s long-suffering barista, Gunther — and photo opportunities with the iconic “Friends” couch.