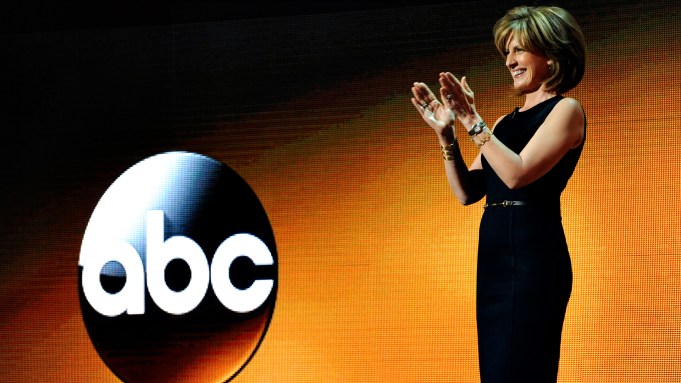 Disney’s longtime TV chief Anne Sweeney will leave her post in January to pursue a career as a television director.

Bizzers had been expecting a decision on Sweeney’s fate in the next few months as her contract with the Mouse House expires later this year. But her goal of shifting from the exec suites to working behind the camera came as a shock. Sources said Sweeney teared up Tuesday morning when she broke the news in a meeting with staffers.

Some immediately interpreted the move as an elaborate graceful exit for the exec, who has been with Disney since 1996, rising through the ranks from running Disney Channel to Disney/ABC TV Group president in 2004.

But it’s understood within the Mouse House that Sweeney was not seen as a contender to replace Bob Iger as Disney CEO when his contract ends in 2016. With no more room to advance, Sweeney has clearly opted to take a left-turn career-wise.

In a lengthy statement, Sweeney asserted that Iger had offered her a long-term contract but she declined. There have been persistent rumors that the two have had chilly relations in recent years. In the meeting with staffers, Sweeney said she realized that if she cut a new deal with the company, she would be 60 or older by the time it ended. That was her wakeup call that it was time for a big career detour.

“I applaud Anne for knowing what she wants out of life and for having the courage to follow her dream. We’re thrilled she’ll be with us through the end of the year, and look forward to having her direct one of our shows in the future,”Iger said in a statement.

Sweeney’s pending departure raises a host of questions about the prospect of management changes at Disney’s TV divisions. (Sweeney oversees all Disney TV other than ESPN.)

ABC Entertainment Group president Paul Lee has endured a rough road this season with a series of strike-outs among ABC’s raft of new series this season.

But sources familiar with the situation say that Lee has a good shot of being elevated to Sweeney’s post. He’s remains well liked internally and is seen as a better fit in a managerial role than a hands-on creative job that demands the kind of volume that ABC needs.

A+E Networks CEO Nancy Dubuc was immediately mentioned as a possibility, but that was downplayed by sources close to Disney and A+E, the cable joint venture that the Mouse owns with Hearst Corp.

Iger indicated in an interview with the New York Times that the successor would come from within the Disney/ABC ranks. Although there have been rumblings about Lee being on thin ice because of ABC’s struggles this season, all indications are that it’s his job to lose. And sources say Lee is in the midst of setting a new employment contract with Disney — something that was in the works before Sweeney dropped her bombshell on Tuesday morning.

“The past 18 years at Disney have been the highlight of my executive career. I’ve been a part of an amazing evolution in our business and our industry, and have achieved far more than I ever thought possible. But as wonderful as the experience has been, there has always been a nagging voice in the back of my head pushing me to step out of the comfort zone of the executive ranks and more directly into the creative arena that enticed me to TV in the first place. I finally listened to that voice and thought, ‘if not now, when?’ I know my decision to step back from all of this to learn the art of directing may seem surprising, but to me it’s a long realized dream. I am so thankful to Bob Iger for his leadership, guidance and his friendship over the years, and am grateful not only for his offer to remain with the company for many years to come, but his understanding and support of my decision to make this change. I’m excited to spend the remainder of this year positioning the TV Group for even greater success.”