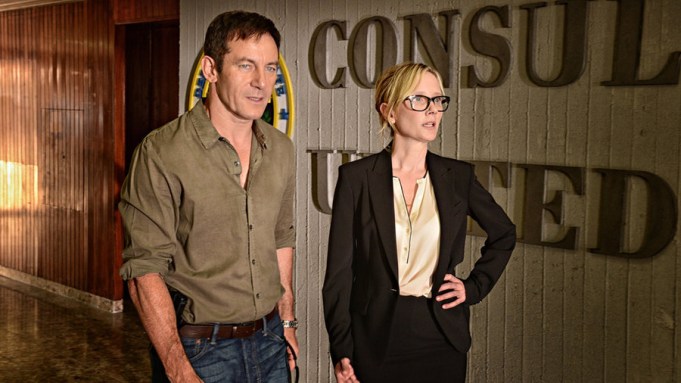 USA Network’s “Dig” is perhaps the cabler’s most ambitious project to date — a high-concept mystery thriller that hails from “Homeland” executive producer Gideon Raff and “Heroes” creator Tim Kring. Set amid the ancient streets and catacombs of Jerusalem, the six-episode event series stars Jason Isaacs as Peter Connelly, an FBI agent stationed in the city, who, while investigating a murder, uncovers a conspiracy 2000 years in the making.

Critics have yet to see the series premiere, but the show still made headlines last month after the escalating conflict between Israel and Gaza forced production to shift from Jerusalem to Albuquerque during a pre-scheduled hiatus. “Dig” is the second of Raff’s shows to be affected by the ongoing violence in the region, after FX’s “Tyrant” relocated from Tel Aviv to Istanbul to finish the last two episodes of its freshman season.

Despite the disruption behind the scenes, Raff and Kring were in good spirits at the show’s recent panel at San Diego Comic-Con, presenting a preview of “Dig” to a full house in the Hilton Bayfront’s Indigo Ballroom. Isaacs couldn’t be at the panel in person but appeared via video call to answer questions posed by the audience and moderator Reza Aslan (who also serves as a consultant on the series), along with co-stars Alison Sudol and David Costabile, pilot director S.J. Clarkson and writer Carol Barbee.

During the Q&A, the panelists emphasized the importance of shooting Jerusalem to lend the series a sense of authenticity — an admittedly risky strategy given that the location is no longer available to them post-premiere.

“The character of Jerusalem is paramount to the storytelling; it has so much history, so many layers,” Clarkson observed, noting that the production also shot portions of the pilot in Canada and Norway. “To be able to be present in those locations, it brings an energy, it brings an atmosphere, it brings something to the screen that you can’t always capture.”

Isaacs agreed, “Jerusalem is a place that ignites passions, not just over the last 60 years, but over the past thousands of years.”

While the series isn’t focused on the current political turmoil — instead exploring the secrets buried in Jerusalem’s past — Isaacs noted that Raff’s writing often “manages to reach out beyond the story into the zeitgeist… everything he’s ever done makes people argue.” Perhaps more intriguing is the suggestion that many of the conspiracies and prophecies featured on the show are based in truth — which meant that after Isaacs heard the concept, “I started panicking and looking it up; I’ve barely slept a full night since.”

While losing such a key location during production is far from ideal, Raff promised the audience that they “are committed to not giving up the scope of the series.” Kring agreed, “We were able to shoot an awful lot when we were in Jerusalem, and we also set the visual template so we know how to tie into those visuals… and it is amazing what you can do with set extensions and CGI. New Mexico will cover really brilliantly for interiors and deserts.”

After the panel, the producers discussed some of the challenges of the move with Variety, both seeming confident in their ability to replicate the tone of the show on American soil.

“We’re scouting stuff that can cover for that visual aspect, which is the ancient stone, the high contrast lighting that you have there, and thankfully all around the Mediterranean, there are places that can double for that. Nothing is quite exactly Jerusalem, but you can double,” Kring said. “And my last two shows, ‘Heroes’ and ‘Touch,’ both relied very heavily on filming Los Angeles for other places. We were never shooting LA for LA, we didn’t have that luxury… So every time to pointed the camera down Pico Boulevard, you had to turn it into someplace else, and so it’s not something that is new to me.”

“We’re prepping Albuquerque right now so I don’t think we’re gonna push [production] too much; I think it’s gonna be a very quick return to normalcy for us,” Raff insisted. “It’s still a story that takes place in Jerusalem, and it’s still about carving those secrets underground in Jerusalem. We were very lucky in the first two hours of the show to shoot in the real tunnels, but the situation heated up a little bit and if we need to now create those tunnels or find them in a different locale, it would still play as Jerusalem. And because I was born and raised there and know the place very well, we’ll be shooting in places that are true and reliable to the show.”

An unintended fringe benefit of “Dig’s” transition to Albuquerque is that it will provide a much more authentic landscape for at least one aspect of the story — the portion featuring Costabile’s character, Tad, the leader of a religious sect which is based in America. Since the pilot filmed in Israel, the producers were trying to replicate the look of the American Southwest around Jerusalem, something that Kring admitted was “much harder to do there.”

“We were coming up against making exteriors for America that are extremely particular, that are very very distant from a Mediterranean country,” Costabile agreed. “It does not look like a gas station in the middle of an American desert… It would have been one of our most expensive sets, whereas you can walk into New Mexico and find 15… So actually, on some level the producorial difficulties have just shifted.”

The producers conceded that comparisons to Dan Brown thriller “The Da Vinci Code” were inevitable, but believe that the series will differentiate itself from that property as the mysteries reveal themselves.

“It deals with ancient ideas and ancient discoveries and symbols… and in an ancient place like Jerusalem that has a religious overtone to it, there’s that element as well,” Kring said. “So it’s totally a fair comparison, and the audience gets to participate in the same way that you did with ‘Da Vinci Code’ where you get to Google things and find out how much of it was real.”

“It’s a different type of story,” Raff averred. “Only five percent of Jerusalem has been excavated, and Tim and I were dreaming of what’s hiding under the 95 percent that’s left to be revealed. In that sense it does have a ‘Da Vinci Code’ theme, but our show is so much about grief and about faith and about fanaticism, and we deal with themes that haven’t been dealt with in that movie. But we’re big fans of the book.”

“It’s as thrilling and intriguing and as much of a ride as that was,” Sudol offered. “I remember reading the book and you do feel as engaged and excited [watching the show] — it’s just a different tone.”

“And the stakes are higher, in that Peter Connolly will uncover a conspiracy that does threaten the world as we know it,” Raff added with a mischievous grin, careful not to spill any of the show’s labyrinthine twists.

Raff explained that the genesis of the show started with Keshet CEO Avi Nir, who approached Raff about developing a series focused on archaeology in Jerusalem because he was born and raised in the city. “I started researching possible conspiracies but also possible characters, and I found out that every embassy outside of the US has this legal attaché, the FBI agent who is investigating crimes against Americans. And I thought, what if it starts as what seems like a local and small crime but turns into a huge conspiracy?” he recalled.

“Because it is a thriller and a mystery, there’s a lot of secrets, and so the pilot lights the fuse of a bunch of tentacles… It has converging storylines, and we are watching a conspiracy start to form. From the very beginning, the opening scene of the show is a fuse is being lit of a prophecy that is 2000 years old and so we watch the various players involved in that conspiracy start to come together slowly. And Jason Isaacs’ character, as the FBI agent, is investigating this seemingly very insignificant murder in the grand scheme of things, but he gets on the trail of something much, much bigger,” Kring teased. “So in that way, it’s a classic thriller structure of a little man against the giant system, somebody who shouldn’t find out the things he’s supposed to find out and then becomes embroiled in it and in trouble because of it and all of that. Gideon and I talked a lot about being inspired by classic ’70s thrillers — ‘Three Days of the Condor,’ ‘Parallax View’ — the lowly little character who finds something out that he shouldn’t find out, and then watching all hell break loose because of it.”

Costabile admitted that he’s a fan of the show’s layered mythology, as both a participant and viewer. “One of the things that’s interesting to me about how they put it together is that you do have to chase the story, it isn’t something that is just laid out to you, and nor are you going to be like ‘oh, I know how it ends.’ And there are many aspects of the story, while it is fictionalized, that come from things that are happening… Human beings love a good prophecy, and we really get to kind of attach ourselves very strongly to what the prophecy is,” he said. “They have fictionalized a small pocket of what could be and, frankly, what is. And that’s exciting.”

“There all sorts of strange bedfellows out there in the world who are connected to single ideas that you would never know would be connected to one another,” Kring observed. “And that can be both exhilarating if you believe it, and frightening if you don’t.”