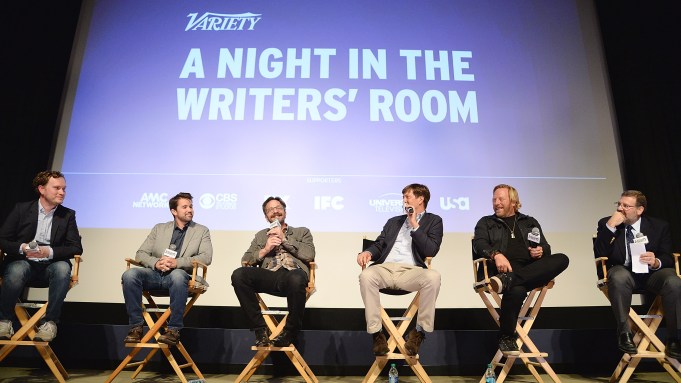 Variety’s annual “Night in the Writers’ Room” panel drew scribes from across the comedy and drama spectrum for a lively discussion about the state of the industry, cable versus broadcast models and the changes they’ve encountered since they joined the business. Variety TV critic Brian Lowry moderated the free-wheeling Comedy Q&A at the Writers Guild Theater in Beverly Hills — although “Scrubs” creator Bill Lawrence did his best to usurp that position — with every panelist demonstrating a thorough knowledge and appreciation of their fellow writers’ work, occasionally offering their own queries and riffing on their colleagues’ responses.

The panelists were quick to agree with Lowry’s suggestion that the television industry is in the midst of a “golden age of comedy,” and while Lawrence asserted that “television comedy is so much better than feature comedy right now,” the participants also conceded that cable has the edge over broadcast in the current creative landscape.

“It’s good that we’re in an age of TV comedy where you can actually turn the TV on and for a few minutes go ‘what the hell is this?’ I think there are so many unique voices and so many different outlets for people to do exactly what their vision is, and there’s networks that support that vision,” Maron noted. “There’s a wide variety of different approaches to comedy that I don’t think anybody’s ever seen before — there are literally shows on TV now that never would’ve been possible before this, and it’s amazing.”

Warburton observed that the lines between comedy and drama have blurred “in a way that is confusing to people and kind of exciting” — pointing to shows like “Orange is the New Black” and “Louie” as series that “are ostensibly comedies but get to emotional truth.”

Maron agreed that in the case of his eponymous IFC series, “the comedy has to come from a real place if it’s going to work for me … Jokes are great, but if you’re not careful, comedy is a way of completely avoiding emotion, and I’m really conscious of that when I’m doing my show: ‘Do you wanna put that joke there or you want to let the sadness come through’? It’s good to choose sadness sometimes, as long as you can buffer it with something funny eventually.”

Carnahan’s “House of Lies” undeniably straddles the line between comedy and drama, and the showrunner admitted that “I end up pulling a lot of the jokes out … and end up with something that is definitely a hybrid. We’re really interested in discussing race and the problems of corporate America, and we do it in a comedic context, but we have Don Cheadle who’s a remarkable actor. He’s really funny but he’s also so engaging to watch.”

Lawrence recalled that “the most trouble I ever got in, career-wise” came after he dared to tell a journalist that he considered “The West Wing” funnier than “Desperate Housewives” at an Emmy panel. “Qualifying anything doesn’t really matter except for bogus awards that no one cares about except the community,” he declared. “TV is TV; I find some dramas incredibly comedic, I find some comedies incredibly poignant … to me it’s either good or it’s not.”

The writers also agreed that a showrunner with an auteur sensibility is paramount in creating a product worth watching. “So many different showrunners are modest and contribute a lot of responsibility to the staff, but every show that everybody’s ever liked has one voice that takes the scripts home on weekends and writes them so they sound like they’re supposed to sound in their heads, whether it’s Shonda [Rhimes] or Marc or whoever,” Lawrence said.

But in the case of series like “Maron” or “Mindy,” the staff often have to juggle a writer’s specific vision with the challenges of having the creator appear in front of the camera, too.

“Mindy [Kaling] is the creative voice and the storyteller of our show, but she has to act 12 hours a day sometimes — especially [on] a network schedule. 22 episodes is an inhuman amount of content,” Warburton remarked. “So the job becomes how to balance a writers’ room with the auteur. Mindy’s the auteur and the rest of us have to get to a position where we’re in a mind-meld with her, where I basically learned to think like an Indian-American ob-gyn, which has been really valuable to me in my life.”

The scribes admitted that it was a challenge to completely block out the constant stream of feedback and reactions from their fanbases in the social media age — but for McElhenney, maintaining the integrity of “Always Sunny’s” characters is key. “We’ve always thought that it’s our responsibility to preserve the tone of the show. As long as we stayed consistent with the tone, and told stories that we wanted to tell, that’s what the audience would want,” he said. “And we had to make sure that each episode felt true to the characters we’ve created, but also continually surprise the audience, which is what we’ve been trying to do since day one.”

Lawrence emphasized the importance of engaging with viewers on Twitter and creating additional content for the fans of his various shows — the industry veteran is currently producing TBS’ “Ground Floor” and “Cougar Town,” and NBC’s “Undatable.” He credits the loyal “Scrubs” audience with keeping the comedy on the air for nine seasons across two networks (NBC and ABC).

“You have to consider them like a mass — you have to keep them generally pleased, because this is a business and they’re the ones who are fighting for you,” he observed.

While all the panelists, save for Lawrence, are involved in single-camera shows, the enduring popularity of “The Big Bang Theory” on CBS and in syndication has proved that multicam sitcoms are still viable, according to Lawrence. “With the prevalence of such deep, multilayered shows, I think there’s always going to be a place for a show you can listen to with one ear while you’re eating dinner and hopefully laugh a little bit,” he said. “I think networks can compete in multicamera comedy and still make a big ol’ throwback sitcom. When they make a singlecamera comedy — on a network, anyway — they have to have somebody who’s captured the zeitgeist like Mindy to have a chance to compete with the storytelling that people are allowed to show on cable and the other outlets.”

When asked to offer advice for aspiring writers and creators, McElhenney was vehement about the importance of demonstrating the viability of an idea before studios or agents even get involved. “Without a doubt, shoot something. The one thing you can’t pitch, or get anybody to truly understand when reading a script, is tone. That’s the single-most important aspect of storytelling on our particular medium — getting people to understand the kind of show you want to make. And right now, we have the technology in our pockets to shoot a television show way better than the pilot we shot ten years ago,” he pointed out. “The only thing that sold that show — about a guy lying to his friends about having cancer to impress the woman that he was stalking — as a comedy, was that we went out and shot it first so I didn’t have to explain and have everybody go ‘What? How is that funny?’ We just popped in the DVD and there it was.”

Lawrence noted that “nine out of ten of young writers I meet still haven’t written anything … You’ve got to have a giant stack of things you’ve written in your car, or you’re wasting your time.”

For Warburton, collaboration is essential — since that’s how the majority of writers produce episodes when staffed on a show. “The rest of your career is going to be working with other people, making something together – find people to hone your craft against and you’ll do that for the rest of your life.”