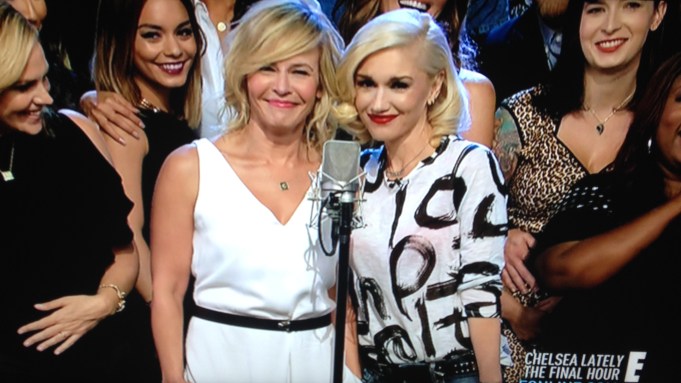 Handler, who is moving to Netflix, was also joined by Selena Gomez, Gerard Butler, Wiz Khalifa, Chloe Moretz, Johnny Knoxville and Fergie, among a slew of other stars, for their “We Are the World”-esque performance of “Roll Yourself a Joint and Have a Drink.”

“I’m really really appreciative to E! for giving me this opportunity to do the show, and I never really got a chance to be serious and say thank you,” she told the audience.

Earlier in the show, Bullock and Aniston staged an intervention for the late night host alongside fellow friend Mary McCormack.

The trio joked that Handler’s move to Netflix was code for rehab.

“Netflix is a wonderful facility where you’ll be able to get all the help you need,” they told her.

Cyrus performed a version of Roy Orbison’s “It’s Over,” while Ellen DeGeneres appeared in a “Nude Shower Fight” segment.

Later, Handler was surprised by former lover, rapper 50 Cent, who also performed for the live audience.

“I did end our relationship abruptly,” she admitted to the the rapper. “I wanted you to know I have not dated a black man since.”

“They say when you go black you can’t go back, well I came running back.”