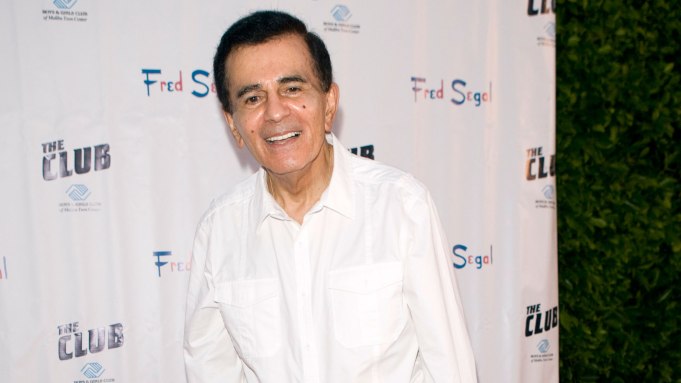 Casey Kasem, the resonant voice of Top 40 radio and a vocal fixture on cartoon programs for the past 40 years died, June 15 in Gig Harbor, Wash. He was 82.

In May, his second wife Jean Kasem and her stepchildren waged a public fight over what daughter Kerri claimed were Jean’s efforts to prevent her from visiting her father. The dispute went to court as reports spread that Casey Kasem’s whereabouts could not be confirmed. Kerri Kasem was ultimately granted visitation rights to her father and the right to make medical decisions on his behalf.

He became a national fixture starting in 1970 as host of the syndicated radio program “American Top 40.”

The format was simple — Kasem counted down the week’s top pop hits with a bit of trivia about the artists, color and feel-good anecdotes mixed in. His relentlessly upbeat outlook was embodied in the catchphrase that he used to close every show: “Keep your feet on the ground, and keep reaching for the stars.” Kasem hosted the show until 1988. At its peak, “American Top 40” was carried on more than 1,000 stations around the world.

He also did TV voiceover work and provided the voice of Shaggy on the Hanna-Barbera cartoon series “Scooby-Doo, Where Are You?,” among other animated programs. He continued to voice Shaggy and other Scooby-Doo characters for various productions as late as 2009. He also provided many voices for “Sesame Street” and the voice of the title character in the Rankin/Bass production of “Here Comes Peter Cottontail.” In addition he was heard in a vast number of commercials.

As “American Top 40” took off, the diminutive Kasem began logging screen roles in 1970s TV shows and movies, such as “Emergency,” “Hawaii Five-O,” “Ironside” and “Charlie’s Angels.” And he continued to do a wide range of voiceover work for TV. In In 1984, Kasem cameo’d in the film “Ghostbusters” in his role as host of “American Top 40.”

Kemal Amin Kasem was born in Detroit to parents who were Lebanese Druze immigrants. He graduated from Wayne State University. Kasem got his start in radio during the Korean War working for Armed Forces Radio. After he left the service and returned the U.S., he worked for numerous radio stations as a disc jockey.

Statuesque blond Jean Kasem,  to whom he was married since 1980, was also an actress known for her roles on “Cheers” and other comedies.

He is survived by their daughter Liberty Jean Kasem; three children from a previous marriage: daughters Kerri and Julie and son Mike; and a brother.

SAG-AFTRA president Ken Howard issued the following statement about Kasem’s death: “For many, the multitalented Casey Kasem was the voice of popular music, and his long-running countdown program brought exposure for many of his fellow union members. My deepest sympathy to his family and friends, and may we all remember him best by ‘reaching for the stars.'”