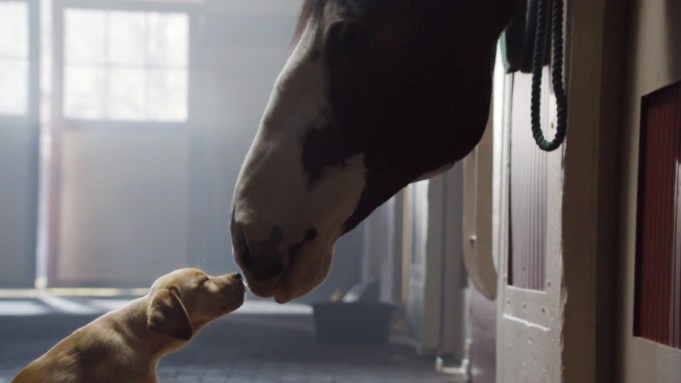 Clydesdales have long been fixtures in Budweiser’s Super Bowl ads, but this year’s spot – which was published on YouTube Wednesday – takes the cute factor to a whole new level with the addition of adorable yellow Labrador puppies.

The commercial, titled “Puppy Love,” is set to Passenger’s hit song “Let Her Go” and features a cuddly Lab puppy that escapes from its outdoor pen at an adoption center and befriends a Clydesdale. When the puppy is driven away from the stable (to the lyrics “Only know you love her when you let her go”), the horses join together to follow the car until the driver is forced to stop and the dog triumphantly leads its enormous equines back to the barn. The video has already received over 1.5 million YouTube views.

As Dalmatians have previously appeared alongside the Clydesdales in Super Bowl commercials, the horses seem to be able to bond with all breeds. This year’s ad showcases the lovable pups in all their family-friendly glory, making it a welcomed addition to the Super Bowl lineup, especially given the popularity of similar programs like Animal Planet’s “Puppy Bowl.”

The American beer company also puts the story line of this spot before the product it seeks to promote. The Budweiser logo does not appear until the end — along with the tagline #BestBuds, which is already creating lots of buzz on Twitter.

Of course, this isn’t the first time Budweiser has appealed to viewers’ softer side. Last year’s ad, “Clydesdales Brotherhood” about the lifelong bond between a man and the Clydesdale he helps deliver was also a tear jerker.