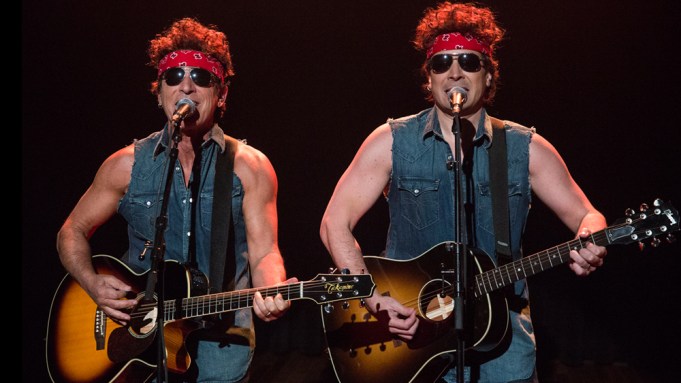 Chris Christie has long been comic fodder for late night comics, but on Tuesday, he became the biting joke target of one his music idols, Bruce Springsteen.

The Boss appeared on “Late Night with Jimmy Fallon” to sing a spoof of “Born to Run,” with lyrics tied to the scandal over the closure of the George Washington Bridge in September. Christie has denied that he knew that aides had allegedly plotted to close the bridge as retribution against the mayor of Fort Lee, N.J. for refusing to endorse the governor’s reelection campaign.

The segment started with Fallon, dressed as Springsteen was in the 80s, singing, “In the day we sweated out on the streets, stuck in traffic on the GWB. They shut down the tollbooths of glory ’cause we didn’t endorse Christie.”

Springsteen soon appeared on stage, also dressed like he did decades ago, and sang, “Man I really gotta take a leak, but I can’t. I’m stuck in Governor Chris Christie’s Fort Lee, New Jersey traffic jam.”

Then Springsteen was even more biting, about Christie’s 2-hour press conference last week in which he aplogized: “The press conference went on and on, it was longer than one of my own damn shows.”

Christie, who has appeared on “Late Night,” is a rabid fan of Springsteen’s, even if their politics often conflict.