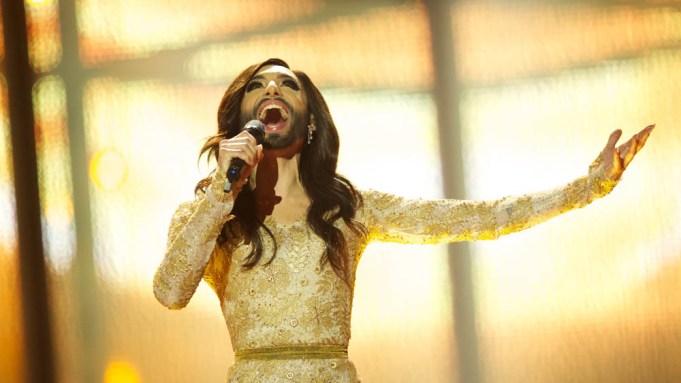 LONDON — The Eurovision Song Contest, which played to a TV audience of more than 120 million Saturday, was won by bearded Austrian drag queen Conchita Wurst.

Wurst said: “This night is dedicated to everyone who believes in a future of peace and freedom. You know who you are — we are unity and we are unstoppable.”

The Netherlands’ The Common Linnets finished second, and Sweden’s Sanna Nielsen was third.

Mariya Yaremchuk of Ukraine was popular with the 11,000 strong crowd in the venue, while Russia’s Tolmachevy Sisters were booed due to their country’s aggression against Ukraine and homophobic laws.

The final of the European singing contest, which was staged in Copenhagen, featured 26 acts from across the continent. The English-language show was hosted by Pilou Asbaek, Lise Ronne and Nikolaj Koppel.

Around 1,600 journalists from more than 80 countries covered the contest.