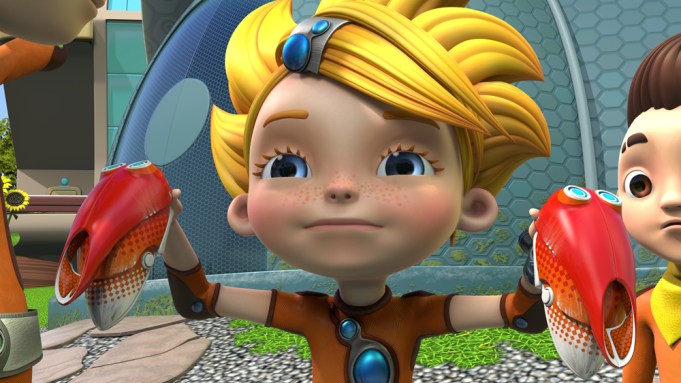 CANNES – “Alisa Knows What to Do!,” a new Russian 3D children’s animated series being offered for the first time at TV market Mipcom, has been sold to Kazakhstan, Ukraine and Israel.

The series, which is produced by Timur Bekmambetov’s Bazelevs, the Riki Group and Animation Studio Moskva, will be aired on free TV in all three countries in 2015. Bazelevs Distribution started international sales on the project at Mipcom’s children’s content market, MipJunior, on Saturday.

In March, the series won Reed Midem’s special award of the Open Russian Animation Festival in Suzdal as the animated series with the highest international potential. Reed Midem, the organizer of MipJunior and Mipcom, gave the series a special showcase at MipJunior as its prize.

The series was watched more than 100 times in the MipJunior digital library. Among the interested buyers were Canal Plus and TF1 from France, SVT in Sweden, RAI in Italy, Radio Canada in Canada and KiKA in Germany.

There is also an “Alisa Knows What to Do!” animation feature, which started production this autumn. The film was also being offered to buyers at the market. Sales are expected to be closed in the near future for the U.S., Canada, Australia, France, Italy, Scandinavia and Asia. The plan is to have a day-and-date release for the feature in Russia, the U.S., Canada, France and Australia in 2016.

The series centers on the futuristic adventures of Alisa and her four friends — 12-year-old children — in the year 2093. The first season has been completed, and the second season is in production. Each season consists of 12 episodes.

The artistic head of the project is the Russian-American director of animation cinema Igor Kovalev. The producers are Bekmambetov, Ilya Popov and Elena Malenkina. The series was produced with the support of Russia’s ministry of culture.

“Alisa Knows What to Do!” was presented at Mipcom as part of the Russian Animation stand organized by the Russian Cinema Fund with the support of Russia’s ministry of culture.