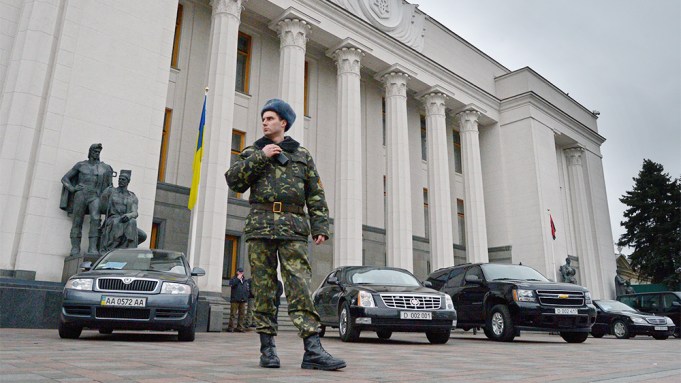 LONDON — Human rights org Amnesty International has called for an alleged attack by a nationalist member of Ukraine’s parliament against the head of one of the country’s leading TV channels on Wednesday to be urgently investigated.

Oleksandr Panteleymonov, head of the First National TV channel, was visited in his offices by Igor Miroshnichenko, a politician from the Svoboda (Freedom) Party and at least five others, who allegedly forced him to write a resignation letter.

The group accused Panteleymonov of working for the Russian authorities after his channel aired a live broadcast of the signing of the agreement between President Putin and the de facto Crimean authorities.

They filmed the assault and posted it on the internet.

The group is then alleged to have taken Panteleymonov by force to apologize to protesters camping out on Kiev’s Independence Square.

“The acting authorities must send a signal that this sort of behavior will not be tolerated in Ukraine,” said Heather McGill, Ukraine researcher at Amnesty International.

“This assault on freedom of expression must be immediately investigated and those responsible must be prosecuted. Anything less will only open the door to further attacks against media professionals and activists,” said McGill.

“The acting Ukrainian authorities must waste no time in demonstrating that basic human rights are protected in Ukraine and that nobody will face discrimination because of their political views or ethnic origin.”

Boxer Vitali Klitschko, who plans to stand in the presidential elections in May, said it was important the MPs were punished, the Guardian reported. “Ukrainians changed the power in the country because of lawlessness and lack of justice. This should not remain unpunished. All Svoboda MPs who resorted to force should vacate their seats,” he said.