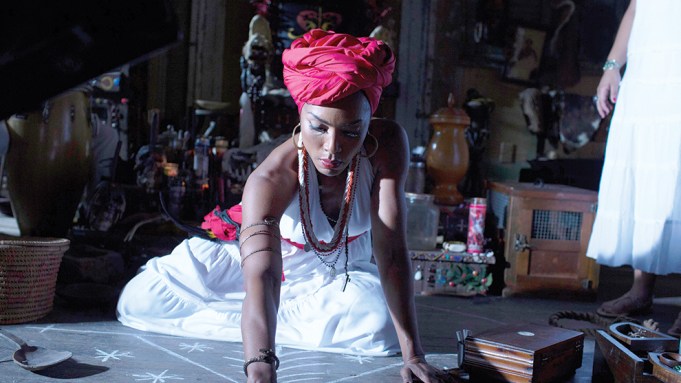 Faced with a wealth of content, the TV Academy decided to put movies and minis into separate categories this year, after combining them three years ago.

The timing couldn’t have been better for uber-producer Ryan Murphy, whose two key projects — HBO’s movie “The Normal Heart” and FX’s miniseries “American Horror Story: Coven” — would have otherwise competed against each other. All told, the two earned 34 nominations overall.

But the two productions couldn’t have taken more divergent paths to the screen.

On the movie front, there’s little doubt that “The Normal Heart” — which garnered 16 noms — will be called again and again on Emmy night. It’s not a question of if, but how often. With a movie star cast and a politically charged storyline, it’s exactly what voters love to reward.

But for Murphy (above, right, with Larry Kramer) it was a “passion project” years in the making, nurtured with his own money to keep away from what he calls development hell.

“Everything about it was very personal for me,” he says. “I had lost a lot of friends growing up. I was of the generation that was coming of age when AIDS struck, so I also felt it was such a seminal piece of work that I wanted to get it right.”

Playwright Larry Kramer had been trying to get the movie made for 30 years, when Murphy stepped in 2009 and made him a promise. “When I first went to Larry’s apartment, I shook his hand, looked him in the eye, and said, ‘I’ll get this made in your lifetime, whatever it takes,’ ” he says. “I’m very proud of the fact that I did. One of the proudest moments of my life was I got to get up in front of everybody and say, ‘Here’s your movie, Larry. And also, you were right.’ ”

Murphy also nabbed 17 noms for “Coven,” the third incarnation of the “American Horror Story” franchise. “It was much more comedic, much more stylish — a completely different part of my brain,” he says. “But it was equally challenging.”

At the recent TV Critics Assn. press tour, FX CEO John Landgraf praised Murphy for revolutionizing the miniseries. “I want to recognize Ryan Murphy for his bold and groundbreaking invention of a new television format with ‘American Horror Story,’ ” he said. “We describe it as the ‘anthological miniseries.’ This innovation opened up new creative opportunity for writers and producers to tell stories a different way.”

“When I first pitched John Landgraf and (20th Century Fox heads) Dana Walden and Gary Newman, they said this sounds very odd, it’s so out of fashion,” Murphy recalls. “I said that’s exactly why we should bring it back. It’s a form of storytelling I loved as a kid. And they bet on the idea. It was a big swing, it could have gone really awry. But I thought the audience would like it.”

He credits his bosses with backing the risks he takes creatively. “Sometimes you fail because you take a risk or you try something that’s different or weird, but I’ve been very blessed and lucky that I’ve been able to do it,” he says. “My bosses really support the idea that I try to do the opposite thing of what I’ve just done. I’ve been very lucky that way.”

Murphy also praises his casts, which are impressively star-studded: Angela Bassett. Kathy Bates. Mark Ruffalo. How does he manage to lure so many A-listers? “It always comes down to pure fandom for me. I just speak from the heart. I tell them, ‘Let me showcase your talent in this character and I promise you it won’t go awry.’ That’s the most fun thing about what I do, but I’ve had pretty good luck (with casting).”

It’s clear the partnership has paid off: “I was very open to collaborating with those actors, and they all turned in amazing performances. If you look at the best supporting actor category, four of the six are ‘Normal Heart’ people (Alfred Molina, Jim Parsons, Joe Mantello and Matt Bomer).”

The limited series concept also helps seal the deal. Jessica Lange did not want to commit to a traditional series run of five or seven years, but she did agree to sign on to the idea of playing a different character every year. “She deserves a lot of the credit as well, because she took a chance on something that a lot of people thought couldn’t work,” Murphy says.

Both projects also share a meticulous attention to detail, from costumes to set design to music, another hallmark of Murphy’s work. “That’s the great joy of producing — I get to create a world. The best thing you can do as a producer is surround yourself with people who are brilliant. I work with great collaborators who can teach me because I like being a student of the world in that way. You’re getting a history lesson. I find that to be nourishing and enriching. Nowadays, I’m drawn to things that scare me to death because I know they’ll force me to change something in my life, or give me a great big lesson in a piece of history. I was always very interested in witchcraft, and the AIDS crisis was so personal to me, and I was so terrified in doing it in a bad way or getting it wrong. That’s what I’m attracted to nowadays.”

The experience of making “Normal Heart” has changed him, he says, and turned him into an activist. He’s talking about funding an AIDS memorial and recording survivors’ stories.

“I’m a much different person now that when I started it,” he says. “I learned a lot. I cried a lot. It made me realize what the power of the medium can do. I’m overwhelmed by it.”

So what’s next for Murphy, beyond season four of “AHS”? “For the first time in a long time, I’m completely open to whatever new adventure is ahead, and I don’t know what that’s going to be.”