Many of this year's Emmy contenders penetrate the heart and soul of the U.S. heartland 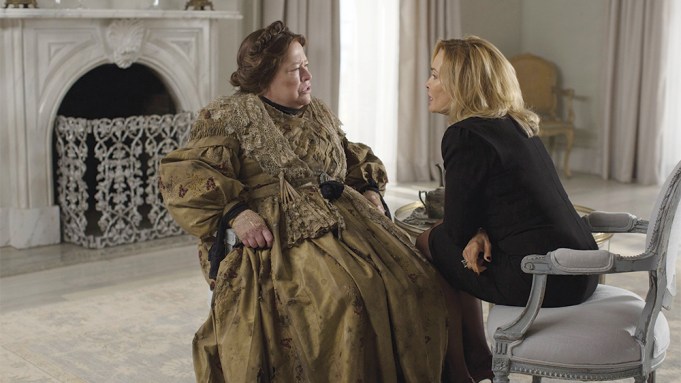 A president is assassinated. Unspeakable evil unfolds in the wintry Midwest. An elderly woman makes a reflective trip to her hometown. Society is ravaged by a plague and the government doesn’t act. Two Depression-era criminals hunker down for a last, brutal stand against the law.

What do these five stories have in common? “Killing Kennedy,” “Fargo” (pictured above, in production), “The Trip to Bountiful,” “The Normal Heart,” “Bonnie and Clyde” — all stand excellent chances of landing Emmy nominations in the newly separated Outstanding Movies and Outstanding Miniseries categories.

And in an important programming trend, all of these shows (along with the sadly ineligible PBS adaptation of “Barrymore”) are archetypal American tales with American characters and themes at their heart.

“On the surface, you wouldn’t think they have much to do with each other,” says “Bountiful” director Michael Wilson, who directed the Horton Foote play on Broadway in 2013 and made his TV debut helming the Lifetime movie. “But what (Larry) Kramer did in ‘Normal Heart’ and Horton did in ‘Bountiful,’ and the rebellious heroes of ‘Bonnie and Clyde’ also did, is capture the desire to tell stories of Americans trying to self-actualize. They’re about rebels of society who have been forced to become that, forced to survive as who they are.”

Stories based in American history or celebrity often do well in these categories: “The Pacific” won as a miniseries in 2010, “Game Change” as a miniseries or movie in 2011 and “Behind the Candelabra” won in the joint category last year. (For 2014 the miniseries/movie category has again been split.)
But this year’s collection, for the most part, contains a large number of nominees whose subjects focus less on celebrity or overt history than on the human beings who comprise these histories, or these stories.

“As Americans, we’re secretly attracted to people who break laws,” suggests filmmaker-producer William Kist, who is also an associate professor at Kent State U. “There’s a nostalgia for some of these mythic American living-on-the-road-type of stories. ‘Fargo’ is set in the wilderness, for example.”

That wilderness spirit was part of the appeal of turning the 1996 Coen brothers film “Fargo” into a limited FX series, says developer-creator Noah Hawley. He homed in on the idea of deeply earnest people living in one of the harshest environments possible, who face evil and are not ruined by it.

“I’ve said it’s the best of America versus the worst of America,” says Hawley. “There’s so much on TV about how staring into the darkness of the human soul makes people darker. And it definitely changes you — but maybe it’s to make you better and not worse. That’s a very American idea; we want to go to bed at night and wake up, thinking tomorrow is going to be a better day.”

The story of President John F. Kennedy’s assassination has been told multiple times on television and the bigscreen, so writer Kelly Masterson, working with Bill O’Reilly’s book, decided to delve into the humanity of both the president and his assassin in NatGeo’s “Killing Kennedy.”

“As dramatists, we’re not only telling a story about us as a people in history, we’re telling a story about us as humans,” says Masterson. “I wanted people to relate to John Kennedy, not remember him as an icon; the flip side was the amazing story of Lee Harvey Oswald. I wanted to write him so other people could relate to him and see his journey.”

Two other classic American lawbreakers, Bonnie and Clyde, also loom large as icons rather than humans. In retelling their story for A&E, director Bruce Beresford wanted to ensure he had a much more “historically accurate” take on the pair. Beresford, an Australian, has made several U.S.-based films (including another Foote drama, “Tender Mercies”) and says when he’s making a movie about Americans he has to be careful to capture the culture accurately.

“I see foreign directors who come to Australia who make films and get so many details wrong,” he says. “Just trivial things. You have to be careful to get all the nuances right.”

Lifetime exec VP and g.m. Rob Sharenow suggests that this focus on American storytelling isn’t all that surprising. “These are American icons, and people find their stories resonant,” he says. “A lot of the films we air touch on familiar myths and legends and moments in history. It’s powerful for an audience to
see themes in contemporary culture reflected in stories that are set in the past. We knew there would be an audience connection to those subjects.”

Demographics may also have something to do with the reasoning behind so many networks delving into the heart of America to tell stories, but not always. Notes “Heart” exec producer Jason Blum, HBO was not interested in the numbers they might attract for the film. “You don’t look at the math of ‘Normal Heart’ and greenlight that movie,” he says.

To Blum, “Heart” may take place in an urban milieu, but deep inside the story of activists trying to get AIDS recognized as a public health threat and not just some “gay disease” is also a true story of American values. “Freedom of speech or freedom to organize and protest are very American, and we’re all taught about people who used them as tools to effect positive social change, and what’s interesting is how people use those tools in very different ways,” he says.

Exactly why so many titles echo American history, values and culture at this time remains a mystery for many.

“Clear History” exec producer/director Greg Mottola, whose satire of a man who lost out on a fortune gets some of its poignancy from the recent economic downturn, tells Variety in an email: “It’s a story about the haves and have-nots — or in this case the almost-haves. Given the growing income disparity in our country, I think it’s a timely story.”

Kent State’s Kist, meanwhile, says the retelling of American fables — many of these stories have seen the light of day in other media prior to this year’s productions — echoes Sharenow’s notion that these are tales we use to strengthen our own beliefs in American tenacity: “In our post-9/11, post-Afghanistan age, with the military downsizing and (Russian president) Putin seen as the tough guy of the world, these fables of the American tough, independent, quirky, almost outlaw anti-heroes might have almost medicinal appeal.”

Whatever the reason, none of them are meant to poke fun at American values; if anything, these films and minis underscore them. How that translates at this year’s Emmys is anyone’s guess, but for Hawley it’s a refreshing change from all the cynicism he sees on television.

“After whatever, 20 years of the anti-hero and how dark can you be, this just feels new,” he says of “Fargo.” “People like to be in a world where you have all these characters who, despite all the bad things they see, still want to see the best in people. We don’t point at the optimists and say those people are stupid. I don’t think they’re stupid. They’re American.”