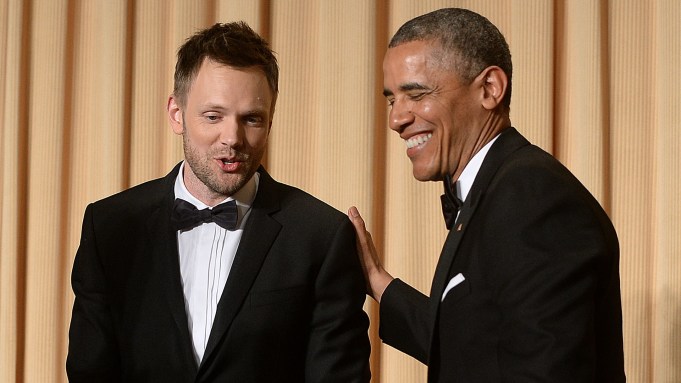 WASHINGTON — As D.C. insiders fanned out at more than a dozen parties in advance to this year’s White House Correspondents Assn. dinner, the talk has been of who isn’t here — the unending parade of celebrities who usually help produce any number of surreal moments, scrambles for selfies and some awkward encounters.

Rather, the connections between Hollywood and D.C. are a little less tenuous: The stars of Washington-based “Scandal,” “Veep” and “House of Cards” have a heavy presence. There’s a smattering of reality stars, but the kitschy excitement has given way to something slightly more serious.

At the annual Garden Brunch on Saturday afternoon, held at the historic Beall-Washington Home in Georgetown, heads turned to catch a glimpse of recent Oscar winner Lupita Nyong’o, where in years past it may have been the novelty of seeing a Kardashian.

“How great it is we are actually at a Hollywood meets Washington moment talking about something important,” Steve Clemons, editor-at-large of The Atlantic, said on Saturday morning at the Grand Hyatt as he emceed a panel about LGBT issues. He was interviewed Dan Bucatinsky, just off of ABC’s “Scandal,” who talked about how the show featured his character’s “really messed up” same-sex marriage. Somehow, he said, viewers could relate to a union that wasn’t all hunky dorey, even if it was a bit dramatic.

“A romantic day on ‘Scandal’ is when your husband calls off the hit on you,” Bucatinsky quipped.

At Google and Netflix’s party on Friday evening at the Institute of Peace, a massive atrium building in Foggy Bottom that would give The Getty a run for its money for its white-hued splendor, Robin Wright of “House of Cards” posed for photos, but some news media types admitted they were hesitant in doing the “ask” for a selfie, given the sharpness of her character on the show.

On a terrace outside, overlooking the Lincoln Memorial, two members of Pussy Riot were laser-focused on their message about expanding sanctions against Russian President Vladimir Putin and the plight of some 30 political prisoners.

Theories abound at why the showbiz presence of this weekend is slightly more muted this year than years past: President Obama’s poll numbers are down, the novelty of interacting with D.C. has faded in the sixth year of his term, or the event itself had become just too much of a circus. In fact, the White House Correspondents Assn. has been trying to return the focus a bit to itself and the Saturday evening dinner, with the organization celebrating its 100th anniversary.

Co-host Tammy Haddad thanked all the presidents and vice presidents on the room — a reference to the dueling on-screen administrations now represented on TV.

Moreover, the sheer number of parties that surround Saturday night’s dinner, highlighted by a monologue by President Obama and entertainment by Joel McHale, don’t appear to have taken the coverage away from the event.

“Honestly, it doesn’t feel as though it has changed much at all,” Jon Lovett, the former White House speechwriter-turned-writer-producer, told Variety on Saturday at the LGBT panel.