‘The Fault in Our Stars’ Premiere: Even Shailene Woodley Admits to Crying 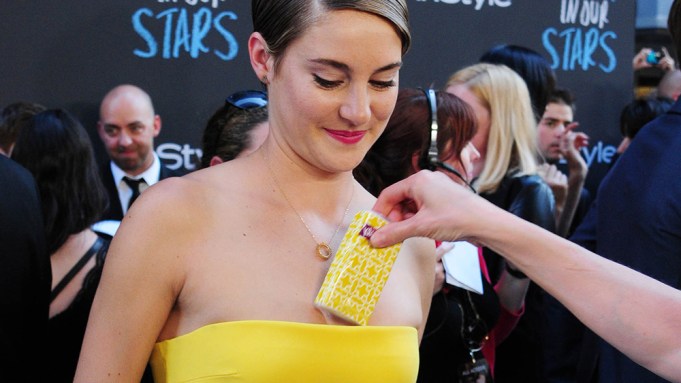 So many people sobbed at the premiere of “The Fault in our Stars” on Monday night, the Ziegfeld Theater sounded like an actual memorial service. Fox invited 300 fans inside the New York screening, and they bawled and gasped throughout the film. A particularly shaky voice even let out a “why!?” during a gut-wrenching scene.

The drama about a teen boy and girl with cancer who fall in love is based on the young adult novel by John Green, who had major hesitations about a film adaptation. “I didn’t want to sell it, because Hollywood sucks at making unsentimental movies about illness,” Green said on the red carpet.

But he was won over by producer Wyck Godfrey (who knows a thing or two about teen angst from the “Twilight” franchise) and executives at Fox.

Godfrey recalled a series of promises he made to Green backstage at one of his reading events. “I said, ‘I’m going to make a movie that doesn’t sentimentalize these characters,’” Godfrey said. “Our lead actress is going to have cables in her nose. Our lead actor is going to have one leg. We’re not going to pull back from that.”

Fox 2000 Pictures president Elizabeth Gabler said that she was making “Life of Pi” when the idea came across her desk.

“I was already doing the most difficult piece of material you could think of in my job,” Gabler said. “I thought, ‘Oh no, it’s about two kids that meet at a cancer support group and fall in love? Can you give me something more difficult than that?’”

PHOTOS: More from “The Fault in Our Stars” premiere

The screenwriting duo of Scott Neustadter and Michael Weber said they sold the studio on giving them the job by offering a first draft in less than two weeks. “We wrote it in six days,” Neustadter said. Some 200 actresses auditioned before Shailene Woodley landed the lead role of Hazel. The part of her boyfriend, Gus, went to her “Divergent” co-star Ansel Elgort based on chemistry tests.

“The Fault in Our Stars” is such a guaranteed tear-jerker, Gabler said the studio made tissue packs for press screenings with the film’s logo.

Even Woodley cried when she saw the movie for the first time. “I don’t know how you couldn’t,” said the actress after welcoming reporters (“hi guys!”) with a trademark hug in the theater lobby. “It doesn’t feel like I’m watching me, I guess, because I’m a fan of a book for so long that it felt like I was watching Hazel and Gus in a way.”

Laura Dern, who plays Hazel’s mom, said that she was carrying her own Kleenex. “I will cry again tonight,” Dern predicted. “It’s a very emotional ride.”

Woodley couldn’t stay for the after-party at the Royalton Hotel because she was flying to Atlanta to continue filming “Insurgent” at 5 a.m. Even though she has coiffed locks from playing a chemotherapy patient, she won’t be wearing a wig in the sequel to “Divergent.”

“This is my hair for it,” Woodley said. “Tris goes short and blonde.”