Saturn Awards: A Genre Reunion and More Gold for ‘Gravity’ 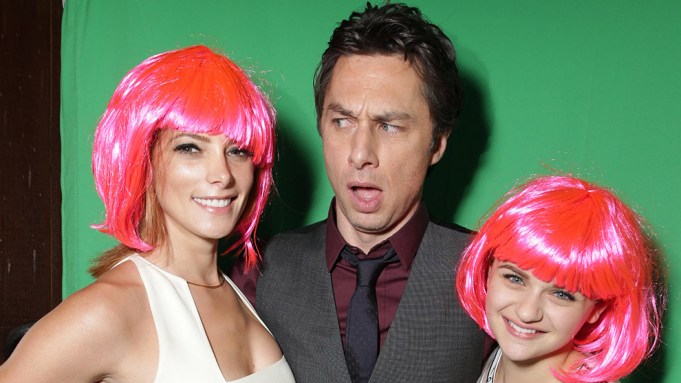 “It’s like Comic-Con meets a Bar-Mitzvah,” said host Jeff Ross as the Saturn Awards began Thursday night. He might be onto something. Surely there were plenty of genre faves at the Castaway in Burbank to excite the fanboys and autograph seekers outside, whose plaintive cries of “Ernie!” went mostly unheeded by Ghostbuster Ernie Hudson.

Among the actors at the Academy of Science Fiction, Fantasy and Horror Films’ annual bash: Malcolm McDowell; Chloe Grace Moretz (winner in the Performance by a Younger Actor in a film category for “Carrie”); Lance Henriksen; helmer Robert Rodriguez, a slew of “Walking Dead” thesps including Michael Rooker, Melissa McBride and Chandler Riggs; and Brad Dourif — not quite Hall H at Comic-Con, but enough to launch a thousand selfies. The actors’ reunions, as old friendships were rekindled, took care of the Bar Mitzvah piece.

PHOTOS: More from the Saturn Awards + Parties and Events This Week

But “Breaking Bad” executive producer Mark Johnson caught another side of the Saturns as he accepted Aaron Paul’s trophy for supporting actor on television, calling the event “the most un-ironic, heartfelt, non-bullshit awards in the industry.” (As if to prove his point, moments later the aud greeted else presenters Lindsay Wagner and Erin Gray like rock stars.)

Downey sent a video acceptance saying that he wants another Saturn to balance the feng shui in his home, so he read off his slate for the next few years, altering each title to make it more Saturn-friendly. He finished the list with “Sherlock Versus Mothra” for 2017.

“It’s the one everyone wants to know about,” said McDowell, “the one I am sick of talking about, and thank goodness for it.” Then he regaled the room with a tale of getting a real injection from actress Madge Davis during a take. “I went up to the fucking ceiling in pain,” he said, and that was the end of Stanley Kubrick “going for something real” with real injections on camera.

McDowell compared “Star Trek” fans (McDowell killed Captain James T. Kirk in “Star Trek: Generations”) to a nest of vipers. “Get a life!” he said with mock outrage. “Shatner deserved everything he got. Besides, I freed him up to do ‘Boston Legal.'”

Rodriguez presented the George Pal Memorial Award to makeup master and hyphenate Greg Nicotero. “He’s so fun to work with because his infectious enthusiasm gets everyone fired up as if it was their first film again.” Nicotero, now famous for “The Walking Dead,” sent a video acceptance speech from the set of that show, beginning with “Walking Dead” characters bashing in zombies’ heads with a Saturn statuette.

Mark Cushman was honored for his 30-year effort to write the definitive history of the original “Star Trek”; the third and final volume will be published this year. Cushman thanked the Academy of Science Fiction, Fantasy and Horror Films, saying “when you spend this much time on a series of books you start to think you’re a little crazy.”

Bryan Fuller, who began his TV career by selling specs to “Star Trek: Deep Space 9” but has gone on to be a TV writer-producer with credits including “Hannibal” and “Heroes,” was second annual Dan Curtis Legacy Award honoree. Fuller saluted Curtis’s memory, recalling that the death of a boy in Curtis’s film “Burnt Offerings” freaked him out as a child. “To all the storytellers, inventors and poets who freaked people out and made them think differently, I salute you,” said Fuller.