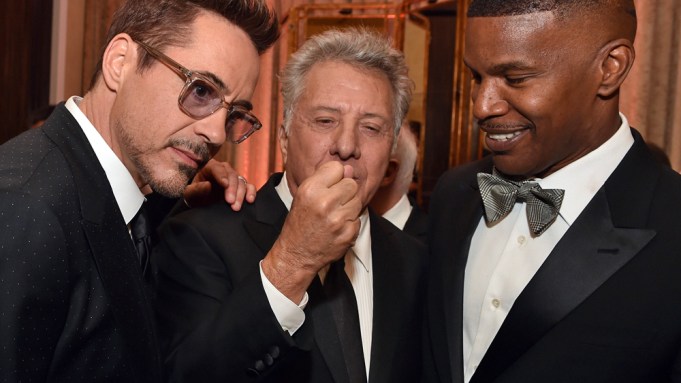 All the big stars came out to support — and surprise — during the fifth annual amfAR Inspiration Gala Wednesday at Milk Studios in West Hollywood. Even the Queen of Motown, Diana Ross, made a appearance, singing her hits “I’m Coming Out” and “I Will Survive.

Diana Ross, the Queen of Motown, performing her iconic "I'm Coming Out" at the amfAR Inspiration Gala. https://t.co/w9DQWcrvqj

Ross was not the only surprise performer — host Gwyneth Paltrow sweetly introduced her former husband, Chris Martin, as “father of the year.” He and Coldplay bandmate Jonny Buckland performed two songs.

Designer Tom Ford nabbed the night’s top honor, amfAR’s award of inspiration, for his work with the org and his generous donations. Rihanna introduced Ford by saying, “We honor him for his creative genius, his leadership, his integrity and his generosity. We honor him for doing good while making us look good.”

Throughout the night, luminaries reminded the audience the main focus of the night should remain on finding a cure for HIV/AIDS that now affects 35 million people worldwide. Kenneth Cole, chairman of amfAR, drew comparisons to the current Ebola situation as well as making references to the past year’s movies that have highlighted the crisis, including Ryan Murphy’s adaptation of “The Normal Heart.”

“There is a reason to remember the fear and decimation of the 80s and to remember there is still no cure,” he said. “This organization is the most powerful tool in which to fight and ultimately cure AIDS.”

Ford said younger generations might not realize the full impact the HIV/AIDS crisis had when it first was identified in the 80s. He urged them to remain vigilant. Miley Cyrus, part of the bastion of youth in attendance, acknowledged the importance of her using her fame to begin a “global conversation.”

“It’s so important for me of all people to represent because I have a voice and I want to start an open dialogue about prevention,” Cyrus said. “Obviously I’m not too embarrassed to talk about these things especially with young people.”

Sharon Stone who has worked with the non-profit that was formed in 1985 toward the beginning of the AIDS epidemic reminded guests throughout the night.

“I’ve taken my own clothes off,” Stone said. “I’ve gone home barefoot, but never ashamed. And that is because we still lost 5,000 men, women and children everyday.”

During the fast-paced auction, Rihanna won Harry Winston earrings for $35,000 and a print of Elizabeth Taylor for $100,000. Her contemporary, Cyrus, who was named the MAC Viva Glam representative, also was very philanthropic, winning a bidding war with Ford and Rihanna for $300,000 on a print from photographer Ryan McGinley of a naked woman. Rihanna, Cyrus and Ford also pledged an additional $200,000 each.

Other celebs in the star-studded crowd showed support for the cause including Justin Timberlake, Tracee Ellis Ross, Lisa Kudrow, Ryan Murphy, Lea Michele and Patricia Arquette.

The fifth annual event raised more than $3 million for HIV/AIDS research and was sponsored by MC Viva Glam and Wells Fargo.