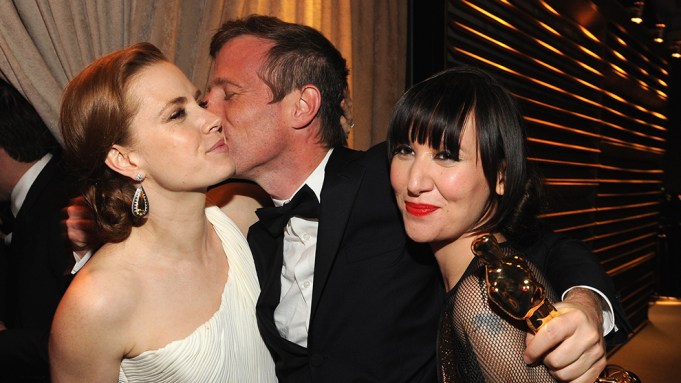 Each year as the Oscar ceremony comes to a close, the after parties are just gearing up as Hollywood luminaries celebrate the official end of the awards season. First stop is always the Governors Ball, which is held in a ballroom a few escalator rides away from the Dolby Theatre.

Guests moved around a garden-like setting that Jeffrey Kurland and event producer Cheryl Cecchetto created to allow a flow of people since the priorities are schmoozing and eating, in that order. Another high priority: listening to the music of John Legend.

The “12 Years a Slave” and Fox Searchlight teams, under co-presidents Stephen Gilula and Nancy Utley, celebrated their big wins with a mixture of joy and relief, with all paying tribute to Steve McQueen. “It’s thrilling to be recognized in such a great year with so many terrific movies,” Gilula told Variety. “It’s great art and great entertainment, plus it’s important. That’s rare.” The Oscars will bring in more audiences to a film that has triumphed at Oscars and at the box office; not bad for a film that some deemed “hard to watch.”

Another long-running popular party is Elton John’s fete to benefit the AIDS Foundation. Now in its 22nd year, it is held in a massive tent set up across from the Pacific Design Center in West Hollywood. A highlight was a musical perf by Ed Sheeran, who was joined on stage by John himself for a rendition of “Candle in the Wind.”

“Thank you for parking yourself here tonight,” Sheeran told the crowd, including the likes of Sarah Hyland, that he had trying to sing along to the chorus Sunday night in a tent in West Hollywood.

The live auction, which included such items as tickets to “Hedwig and the Angry Inch” on Broadway with a backstage tour and drinks with the tuner’s star Neil Patrick Harris and five days at Tyler’s Hawaiian home, raised $5.1 million for the AIDS Foundation.

Oscar host Ellen DeGeneres was among those sending videotaped messages to guests at the viewing party.  “This is the kind of generosity that will help us change the course of this epidemic,” John said.
The stars also showed up for a brand new post-Oscar party held at The Vineyard Beverly Hills. Charlize Theron and Halle Berry were among the guests at the inaugural Fame and Philanthropy party.

Theron, who arrived with boyfriend Sean Penn after attending the ceremony, stuck to the VIP area while her fellow Oscar winner Berry was flanked by body guards as she made her way through the crowd.

Academy Award-winning helmer James Cameron gave a lengthy opening address before the party really got started and called attention to the charities being supported by the event, including The Community Inspiring Today’s Youth and the Charlize Theron Africa Outreach Project.

Cameron talked about his own Oscar experience and said he was happy that the Academy “shared the love” between “12 Years a Slave” and “Gravity.”

“It was an embarrassment of riches this year as an Academy member having to vote on this. It was a tough call in some of the acting categories,” Cameron said. “But what’s great is we get to have the glitz and the red carpet and the glamour and everything here, but we’re doing it for a good cause.”

Cameron also gave a shout out to the work of best director winner Alfonso Cuaron. “Alfonso won because that movie is one of the most technical films imaginable, but unbelievably powerful emotionally,” Cameron noted.

As the festivities continued, partygoers enjoyed the club-like vibe as the Stafford Brothers took over the DJ booth and tossed inflatable kangaroos into the crowd. Actress-singer-dancer Zendaya hit the dance floor and posed for several photos with guests while others opted for a turn in the photo booth, complete with Hollywood-themed props.

Ne-Yo’s set got the entire crowd on its feet as the Grammy-winner performed a medley of his hits including “So Sick,” “Let’s Go” “Let Me Love You” and Pitbull’s “Give Me Everything.”

The crooner took a moment in between songs to acknowledge the night’s big winners and also noted that he recently celebrated the eight-year anniversary of the release of his debut album, “In My Own Words.”

Following Ne-Yo’s performance, Paris Hilton took over the DJ duties, spinning tunes like Michael Jackson’s “Don’t Stop ‘Til You Get Enough.” Guests seemed to take those lyrics to heart, as the party kept going strong well into the early morning.