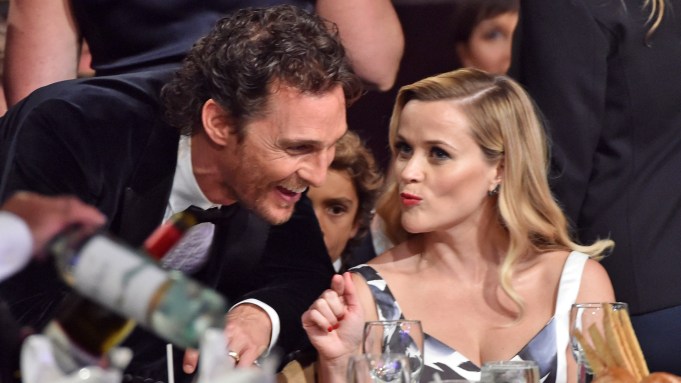 Matthew McConaughey cleared some misconceptions and shared a few lessons he’s learned in 22 years in Hollywood at the American Cinematheque gala Tuesday at the Beverly Hilton.

“I did not get offered the ‘Titanic’ role,” said the night’s honoree, clearing that out of the way before getting to some of his lessons.

Secondly, “you have to prepare, that structure helps you play,” he added relating the story of how early in his career, carried away with the thought of being a “natural actor” he didn’t read the script till he got on set. “Then I found out it was a two-page monologue in Spanish.”

The third lesson he wanted to share was about bringing his kids on set. When he was younger he’d thought that was a bad idea. However, once he had children, McConaughey said, “I so love having my children engaged on set.”

Unlike previous American Cinematheque galas this event didn’t turn into a roast of the honoree. Sure, his co-stars ribbed him, with plenty of impersonations from Kate Hudson to Reese Witherspoon and Woody Harrelson (via taped message). Also sending taped messages were Sandra Bullock, who read a poem she said she’d written, and Richard Linklater, who directed McConaughey in “Dazed and Confused,” “The Newton Boys” and “Bernie,” but “he never took his shirt of in any of my films.”

There were also some serious moments when presenters Jennifer Garner praised his wife, Camila Alves, and Lili Fini Zanuck talked about the foundation McConaughey set up after his father passed away: The Just Keep Living Foundation.

Helmer Christopher Nolan said, “I’m not a believer in the McConaissance. I think we’re just catching up to what he’s been doing.”

As usual there were clips from McConaughey’s films including the upcoming “Interstellar,” which Nolan directed, introduced by his co-star Jessica Chastain.

“I enjoyed watching 22 years of my career thrown at me with the people (with whom) I had my career,” the actor said. “I enjoyed that walk down memory lane.”

Watching it with him were not only his family, including his wife and children but also his mother and mother-in-law; Paramount’s Brad Grey, Jim Toth, Mackenzie Foy and the American Cinematheque’s Rick Nicita. For the last toast, Kimmel raided the beer bucket at the star’s table and shared three Miller Lites on stage with McConaughey and Nolan.

Funds raised at the gala support the American Cinematheque’s public programs at the Aero & Egyptian Theatres.