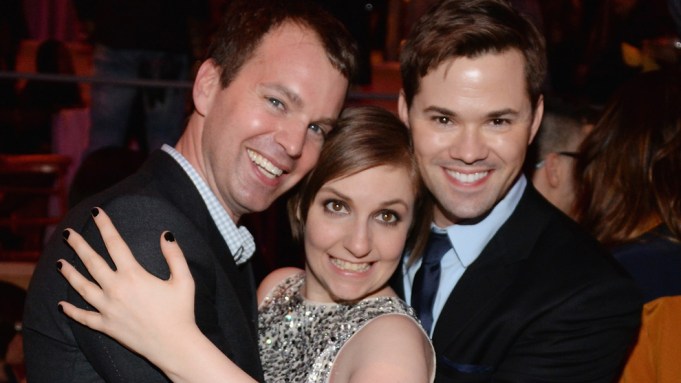 Jazz at Lincoln Center sits right at the start of New York’s increasingly posh Upper West Side. So you expect a certain type of party at the musical venue.

But people who came to celebrate the coming third season of HBO’s “Girls” got something a little different — like an entire New York subway platform and accompanying newsstand (which also functioned as  a bar) built right next to the venue’s famed Allen Room. They dined on something equally off-kilter: southern-themed dishes like fried chicken served on a waffle or slow-cooked brisket.

And of course, they heard some naturally inappropriate comments from Lena Dunham, the series’ creator, star and frequent writer/director, who plays the entitled and self-absorbed but well-meaning Hannah Horvath. When thanking people from the stage before screening the third season’s first, second and seventh episodes, Dunham joked that she felt so comfortable with the actors who play her parents on the show that “at this point, I’d call you if I needed an abortion.” She also thanked Time Warner CEO Jeff Bewkes.

Series regulars Allison Williams, Jemima Kirke and Zosia Mamet all appeared on the red carpet before the event, along with Steve Buscemi, the star of HBO drama “Boardwalk Empire.” Among the guests appearing in the third season of “Girls,” which debuts on HBO January 12, are Kim Gordon, Rita Wilson, Amy Schumer and Debra Monk.