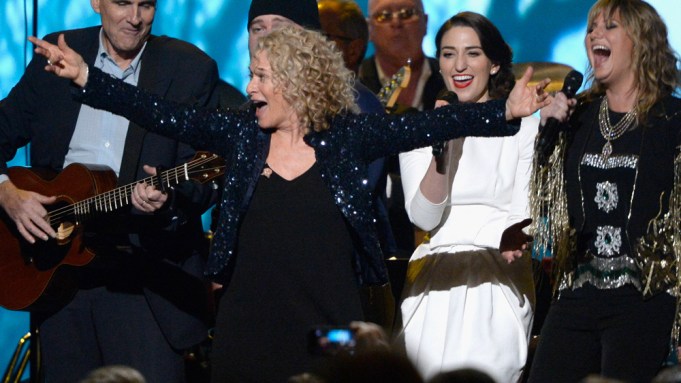 Discovering that Lady Gaga is an ardent admirer of Carole King is akin to Axl Rose calling Elton John his hero. But there she was Friday night — dressed all in white behind a color-matched grand piano — bringing down the house with a heart-wrenching version of “You’ve Got a Friend.”

But given the deep well of strong material to draw from, the star-studded tribute to King, MusiCares’ Person of the Year, consisted mainly of peak moments, beginning with Steven Tyler and LeAnn Rimes turning “Hi-De-Ho,” which King co-wrote with her ex Gerry Goffin, into a barn burner.

And so it went, with performers that included King’s daughter Louise Goffin, who dueted with another scion of Great American Songbook royalty, Jakob Dylan; Pink; King’s soul mate James Taylor; the women from “20 Feet From Stardom”; and Alicia Keys, who called King “the most magnificent songwriter-composer on earth.” Needless to say, Keys did justice to King’s “Natural Woman,” while the audience and longtime King producer Lou Adler, among countless other luminaries, basked in all the good vibrations.

“Holy shit!” exclaimed M.C. Jimmy Kimmel at one point, “I know we’re all rich and jaded but we’re pretty lucky to be here tonight, right?”

The evening raised $5.5 million for MusiCares, which provides emergency financial assistance and addiction recovery programs to musicians in need.