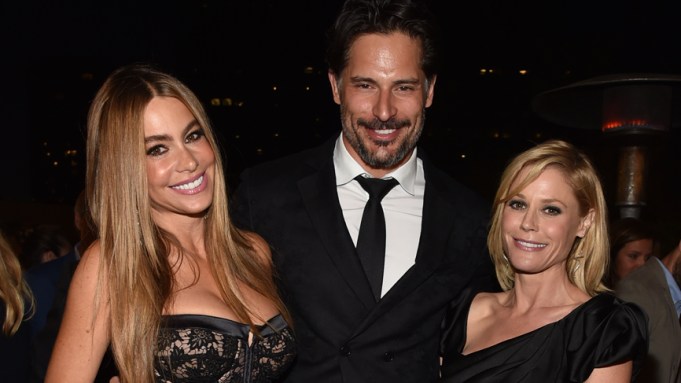 The Emmy Awards are on NBC at 5 p.m. Monday, but the celebrations start early. Variety will be on hand inside the best parties around Hollywood as the stars mingle, nibble and toast to TV’s finest. Here’s our party report for Sunday, Aug. 24:

11:55 a.m. ICM Partners’ annual brunch has become a welcome respite from the swirl of nighttime events on Emmy weekend. Waiters with cups of Sangria spiked with apple slices and grapes greeted guests on the steps of Chris Silbermann’s Santa Monica home. The brunch  was fantastic — fresh crepes made on the spot, blintzes, all manner of egg dishes and fruit. There’s a reason we skipped breakfast.

12:05 p.m. No ICM Partners brunch is complete without a chat with “Breaking Bad’s” Vince Gilligan and his rep Mark Gordon. Vince was cheery as usual with a pink shirt to match. He’s not exactly stressing over what happens on Monday night when the drama series winner is called, but he’s genuine enough to add that any nominee “who tells you they don’t care is probably lying.”

12:10 p.m. “Downton Abbey’s” Gareth Neame comes over to say hello. He’s taking a quick break from Blighty for the Emmys even as his Carnival Films unit is juggling multiple new projects, some of which will come to light soon. He notes that the difference between TV awards in the U.S. vs. Britain is the Stateside focus on big successful series. “The classic British TV awards show winner is a show that ran six episodes and has already been canceled,” he observed.

12:15 p.m. ICM’s Lorrie Bartlett is chilling in the shade with Scott Foley.

12:30 p.m. ICM’s Chris von Goetz sounds like a proud mentor, talking up the success that rising-star agent Laura Gordon has had during her first staffing season. She’s a comer for sure.

12:50 p.m. NBC’s Jeff Bader is asked for the 1000th time why the awards were moved to Monday this year. Wearily, he notes that one of the complicating factors was the fact that the Academy had to have the Nokia venue for two Sundays in a row in order to accommodate the Creative Arts ceremony as well. With good humor, he also observes that for 15 years of his long career at ABC, the Academy Awards were held on a Monday “and the world didn’t end.”

1:00 p.m. CBS’ Scott Koondel is looking very tan after just coming off a family trek through Rome, Saint-Tropez and other exotic spots. He makes a second trip back to the blintz tray but asks that we not let him have a third. Blintz patrol!

1:05 p.m. AMC’s Joel Stillerman is channeling “Halt and Catch Fire” characters in the midst of a conversation with about research into brain stimulation. In the background, his boss, Charlie Collier, is working the room like only he can.

1:20 p.m. There’s still plenty of mingling to do, but my gut tells me it’s time to leave before we have a third blintz.

5:38 p.m. This year’s Emmy broadcaster NBC has staked out BOA steakhouse on the Sunset Strip for their pre-show party, and some of the network’s youngest luminaries already have their priorities straight: “Parenthood” preteens Tyree Brown and Savannah Paige Rae are in line for the food, while “About a Boy’s” Benjamin Stockham has snagged a nearby table for the trio to nibble at before they mingle.

6:14 p.m. The cast of NBC’s Charles Manson thriller “Aquarius” is out in full force at BOA — all except lead David Duchovny, that is. “Game of Thrones” alum Gethin Anthony is rocking a respectable beard for his role as the infamous killer (along with a snazzy green velvet jacket), while costars Grey Damon and Emma Dumont converse nearby.

6:20 p.m. “Heroes Reborn” star Jack Coleman is beset by admirers wherever he goes — likely trying to glean intel on what HRG has been up to since the original series left the air in 2010.

6:44 p.m. “State of Affairs” headliner Katherine Heigl is holding court at a booth in NBC’s outdoor dining area, with husband Josh Kelley and mother Nancy by her side. Fellow “Roswell” alum and current “Night Shift” fixture Brendan Fehr stops by to catch up with his former costar.

6:58 p.m. “Thor” star Jaimie Alexander has reunited with her “Kyle XY” producer Julie Plec, and the two are animatedly chatting along with Alexander’s beau Peter Facinelli, who appears in NBC’s midseason drama “Odyssey.”

7:00 p.m. Winning the punctuality contest at the VIP cocktail party at MPTF’s Evening Before party at the Lawn at Century Park: Halle Berry and Olivier Martinez are first to arrive. They’re greeted by Jeffrey Katzenberg.

7:02 p.m. The “Marry Me” gang has arrived at NBC, and Casey Wilson has brought her father as her date. Her former “Happy Endings” costar Adam Pally stops by to shoot the breeze, laughing with Ken Marino, who once had a cameo on the ABC comedy and now gets Wilson all to himself on their NBC laffer.

SEE ALSO: Photos from All the Weekend’s Emmy Awards Pre-Parties

7:08 p.m. Mandy Patinkin hits the red carpet at Showtime’s Emmy Eve bash at the Sunset Tower in a sleek black button down-pants ensemble. Gushes over his son’s upcoming nuptials in New York and shares a a bit of insight about his character Saul Berenson’s Jewishness: the idea to say Kaddish in season one following the death of an alleged terrorist was all his: “Someone had died and it was what I had learned to do growing up.”  He also reveals that he’s got a new stage play in the works.

7:10 p.m. At the Evening Before party, Halle Berry and Octavia Spencer greet each other with a looooooooooooooooong hug.

7:12 p.m. Allison Janney arrives at the Showtime party wearing a disco-inspired gold top and tight black leather capris. Hair a tumbling crest of loose waves. Reveals that the pool scene from season one with Teddy Sears was “the hardest” scene: “It gets so cold!”

7:18 p.m. It’s a power powwow: Jerry Bruckheimer and Chuck Lorre stake out a spot by the bar with Warner Bros.’ Peter Roth at the Evening Before party. They’re joined by Kevin Tsujihara and then Kaley Cuoco-Sweeting.

7:22 p.m. Matt LeBlanc blushes when told that he plays an “effortless” version of himself at the Showtime Emmy Eve party. “That’s so nice to hear.”

(Lisa Kudrow and Matt LeBlanc get friendly at Showtime’s party)

7:26 p.m. “Downton Abbey” costars Joanne Froggatt and Michelle Dockery compare their swing skirts, doing a cute twirl before meeting for a hug at the Evening Before party.

7:30 p.m. William H. Macy discusses episode 7 of the new season of “Shameless” at the Showtime party, which he is directing. “My character faces a new challenge this year…because he’s trying not to drink as much… you know, with the new liver and all.”

7:39 p.m. At the Evening Before party, Ricky Gervais is caressing his gut in a black t-shirt to an admiring crowd including Will Arnett and Aaron Paul.

8:06 p.m. At the Showtime party, Lizzy Caplan, in an amazing 90’s-retro style burgundy dress with a built-in brown leather belt “should be nervous about (Emmy) night” but isn’t. “I haven’t written a speech or anything.”

8:09 p.m. The NBC party is still in full swing, but there’s a little more breathing room as some revelers call it a night (or hop to another soiree). “Saturday Night Live” ladies Aidy Bryant, and Kate McKinnon have secured a booth and are chuckling with Adam Pally.

8:10 p.m. Sofia Vergara, with date Joe Manganiello, admires her “Modern Family” daughter-in-law Julie Bowen‘s shoes at the Evening Before party. “I can’t wear those,” she says, in her own skyscraper heels. “I get knee pain!”

8:22 p.m. David Nevins takes the stage at Showtime’s fete, and, as usual, is immaculately dressed — despite having an arm in a sling. “This is an affectation. If it doesn’t work I will add an eye patch.”

8:43 p.m. There is a “Friends” reunion of sorts on the patio, as Matt LeBlanc talks with William H. Macy while Lisa Kudrow stands in the crowd next to him with producing partner Dan Bucatinsky.

9:15 p.m. It’s been a long night of mingling for AMC’s Josh Sapan, as he sits by the red carpet at the Evening Before party with his daughter, both busy with their phones.

9:30 p.m. Krysten Ritter asks about the Dodge booth game — participants strap in to a Dodge Challenger or Charger and face off in a racing videogame. (At No. 5 on the current leaderboards, Brie Larson with a 01:06.02 in the Challenger.) When a staffer explains it to her, she says, “Oh my gosh, yes!” and gets in the long line, but is pulled away after spotting a friend.

9:35 p.m. Claire Danes leads Hugh Dancy by the arm on their way out of the Showtime party. “We’re really tired, just flew back from South Africa,” said Danes to a few fans as she brushed past.

9:42 p.m. Oh yeah, MTV’s VMAs are on! Did we miss anything? Doug Herzog is chatting with Netflix’s Ted Sarandos at the Evening Before party. (Perhaps discussing Blue Ivy’s dance moves.) Lena Dunham walks by in a stunning pink dress and her shoes in her hands. Always a sign of a good party.

Whitney Friedlander and Janine Lew contributed to this report.