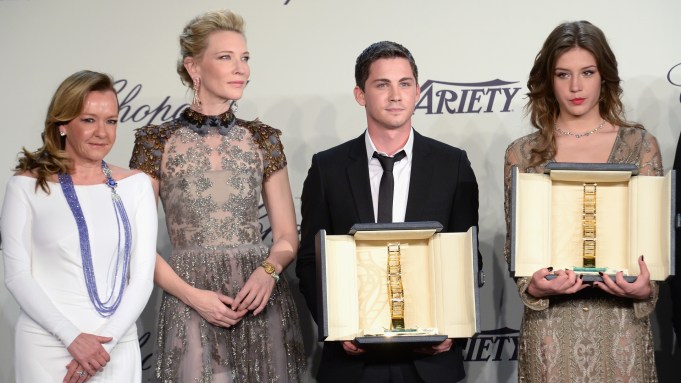 On Thursday night, Adele Exarchopoulos (“Blue is the Warmest Color”) and Logan Lerman (“The Perks of Being a Wallflower”) accepted the Trophee Chopard at a Variety co-sponsored event at the Cannes Film Festival.

Former winners of the annual prize for up-and-coming actors, which was started in 2001 by the luxury accessories brand, include Hayden Christensen, Shailene Woodley and Jonathan Rhys-Meyers.

Cate Blanchett acted as the evening’s guest of honor. “I have an inappropriate crush on both of them,” Blanchett teased in her opening remarks about the two honorees.

A jury with Harvey Weinstein and director Atom Egoyan, among others, selected the two actors for the award. The evening started with short speeches from Cannes president Gilles Jacob, Chopard’s co-president Caroline Scheufele and Variety managing editor Steven Gaydos.

The after-party was held at the rooftop of the Hotel Martinez with guests Jane Fonda, Lupita Nyong’o and director Pedro Almodovar.

Lerman, who told Variety this was his first time at Cannes, said he was at a point in his career where he was just starting to get recognized. “It’s mainly young girls,” he said. “Not that I’m down about that.”