Sean Penn Gathers Celebs to Help Haiti Home, U2 Closes Out the Night 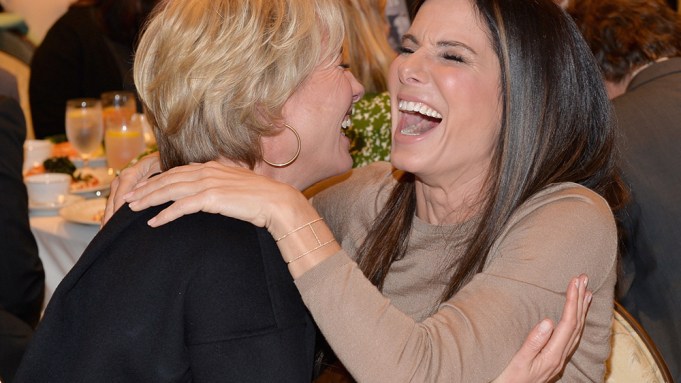 On the eve of the Golden Globes, Sean Penn gathered an impressive group of A-listers and organized a surprise U2 performance for his third annual Help Haiti Home gala, which raised approximately $6 million benefitting J/P Haitian Relief Organization.

Since the devastating 2010 earthquake, J/P HRO has been working to help Haitians rebuild their communities by providing access to health, education, community development, housing and economic opportunties. Penn founded this organization in January 2010 and serves as chairman of the board and CEO.

Also in attendance was Charlize Theron, whom Penn alluded to in a speech later in the evening as “a certain woman from South Africa,” marking their first public event together as a couple.

Before the event officially began, stars made their red carpet appearances and mingled with other guests over drinks before heading to their tables. “Vampire Diaries” actor Paul Wesley caught up with his co-star Steven R. McQueen, while Roberts and Thompson chatted inside the main ballroom and posed for photos.

Anderson Cooper, the evening’s MC, kicked things off with his opening address and spoke about the reality of the situation in Haiti four years after disaster struck.

“I urge you to go to Haiti and see it for yourself,” Cooper said. “Haiti pulses with life,” he continued. “Tonight, we celebrate that life, and that hope and that strength.”

The night also included musical performances by Israeli musician Asaf Avidan and Haitian singer Anaelle Jean-Pierre, who performed a rendition of Leonard Cohen’s “Hallelujah” and was joined onstage by U2’s Bono and The Edge. Jean-Pierre, who has personally been affected by the work of J/P HRO, also received a standing ovation after her emotional performance.

J/P HRO senior vice president of Haiti operations Gary Philoctete made a moving speech about the Haitian people’s desire to rebuild their country and shared his hopes for the future of his country.

When Thompson took the stage to honor U.S. ambassador to Haiti Pamela White, she kept the crowd laughing and cheering her on as she cursed, joked about the “presidential” nature of the teleprompter and urged the audience to look at her instead of watching her image on the large screens on either side of the stage (“I’m right here! Don’t look at the screens. I’m challenging you all to look at me”).

All joking aside, Thompson reinforced the purpose of the event.

“The only thing that makes human beings happy is to serve one another,” Thompson said. “That’s what we’re here for.”

She then returned to her playful banter as she revealed that after all the awards season events she had been to, “This is the first night that I’ve been having a good time.”

Ambassador White also reminded the night’s high-profile guests of their influence and called upon them for help.

“When you speak, people listen,” White explained. “We need to project a new image of Haiti, a Haiti that is open for business. You can help with that,” she continued.

Penn was the last of the evening’s speakers and asked his friends to do what they could to financially support J/P HRO.

“The glorious and resilient Haiti is the country we are blessed to have as a neighbor, Penn said. “Reach deep, then reach deeper.”

Guests certainly did reach deeper during the live auction, which included a bidding war on a painting between Theron and Coldplay front man Chris Martin and his wife Gwyneth Paltrow (Martin won at $650,000) and packages ranging from a day in New York City with Bill Clinton to a $1.4 million winning bid from Cooper on a sculpture made from Penn’s decommissioned guns.

It was also announced that a portion of the money raised will go to the Happy Hearts fund to support relief efforts in the Philippines following the recent typhoon.

Penn made good on his promise to surprise and “reward” the audience for their participation in the auction as he introduced the members of U2, who performed some of their hits including “Vertigo” as Thompson and others danced along.

The dancing continued at the after party, tuned to the sound of DJ Samantha Ronson. While Penn and Theron departed rather quickly, others stars including Usher, Sarah Silverman and David Spade spent some time catching up after the successful event.